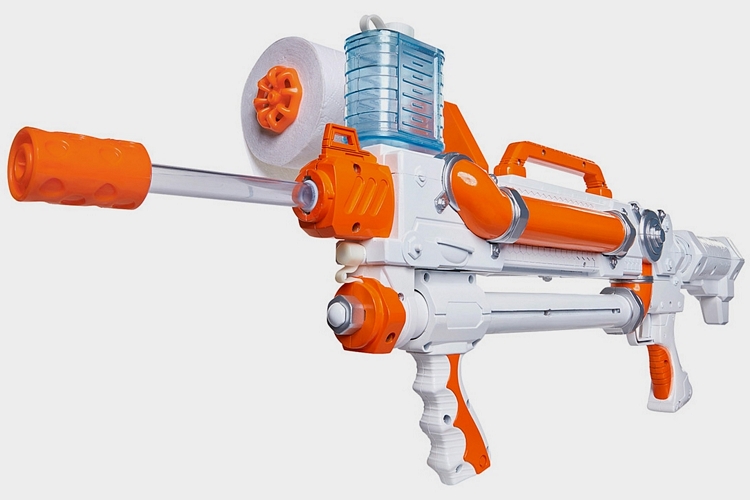 Remember the Skid Shot, a blaster that shot rolled-up toilet paper sheets, instead of foam ammo? It’s awesome, since you can just load an entire roll of teepee for ammo and have the blaster do all the work of turning it into projectiles. Seriously, no more collecting foam darts on the ground – just pull the trigger over and over until you need to load another roll. The Toilet Paper Blasters Sheet Storm improves on the original by letting you shoot its wet, rolled-up teepee projectiles at a much faster rate.

While the Skid Shot required you to pull on two levers before pressing the trigger, essentially taking far too long between shots, the new blaster condenses the priming stage into a single action. That way, your target won’t have far less time to run for cover or take a shot your way, increasing your chances of actually winning the duel whenever it occurs.

The Toilet Paper Blasters Sheet Storm replaces the dual-lever priming of the original with a single pump-action reload mechanism, with the blaster automatically ripping a sheet from the roll and rolling it into a wet spitball with a push and pull of the slide under the barrel, leaving you ready to fire a round in short order. It comes in a rifle form factor, so you can aim very steadily with two hands, although the placement of the water tank right above the barrel means you can’t aim down sight, so it’s more about shooting from the hip with this thing in tow.

As with the original blaster, it uses a roll of toilet paper for ammo, which can be loaded conveniently on the right side of the blaster, making it very easy to put in a new roll as soon as you run through the last one. Each standard roll of toilet paper can provide over 350 rounds of ammo, allowing you to stay in the thick of battle for a sustained period before needing to lie low to switch teepee rolls.

The Toilet Paper Blasters Sheet Storm has a range of approximately 50 feet, which may not be as powerful as modern Nerf blasters, but should be good enough for close-quarters situations, whether you want to annoy a co-worker in the office or just fire spitballs at your friends in the backyard. The exact range, by the way, is going to vary depending on the spitball, since no two are ever rolled at exactly the same shape and weight – a side effect of using spitballs that are produced on-the-fly, instead of foam ammo manufactured in controlled settings inside a factory.

Granted, shooting tiny spitballs means you’re likely to have hundreds of these scattered all over, from walls and floors to doors and windows, making an absolute mess wherever you’re playing. So yeah, nobody’s going to enjoy cleaning that battlefield, so keep that in mind, in case you’re thinking of playing at home or in the office.

The Toilet Paper Blasters Sheet Storm is scheduled to come out later in the year, priced at $39.99.