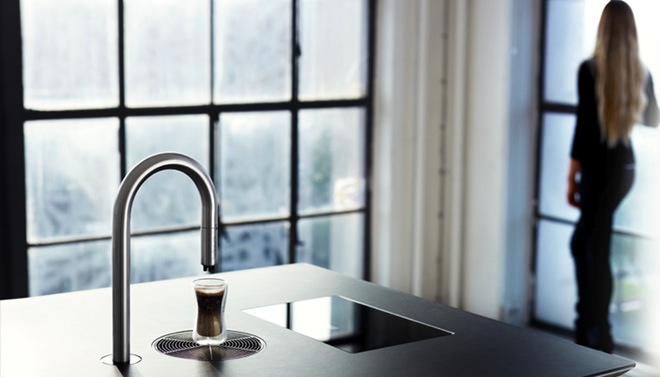 You love your coffee, but you can’t lie — the messy army of coffee-making appliances in your kitchen doesn’t leave you happy.  While an invisible coffeemaker should solve that problem, we don’t think that one’s left Wonder Woman’s kitchen just yet.  The Top Brewer might make for a more realistic solution.

Made by Scanomat, the minimalist design shows nothing but an arcing tap that looks more like a faucet than a machine that makes your favorite morning beverage.  Yes, it looks like magic.  But it isn’t.  Instead, the actual coffee-making assembly is hidden underneath, operated by elves, trolls and a talking hamster.  No, really.

The Top Brewer actually includes a set of appliances that all sit under the tap, hiding inside your kitchen counter or island so you can stay in perpetual denial of your ever-worsening caffeine addiction.  And, no, it’s not a compact machine that sits there, either.  Inside, it’s one hulking mass of grinders, heaters and brewers that you can access via a sliding drawer installed to the side of the table.

To ensure freshness, the rig will only grind the beans and heat fresh water when you come up for a fresh cup.  And, no, it won’t take too long, either.  Equipped with high-output appliances, it can go from complete standby to a finished cup in under a minute.   Milk is mixed automatically, too, which it heats and froths before dispensing for your cup of latte or cappuccino.

You can control the Top Brewer via a touch-sensitive control panel installed on the tabletop, as well as from a soon-to-be-released iPhone app.  No pricing yet, but expect this to be steep.