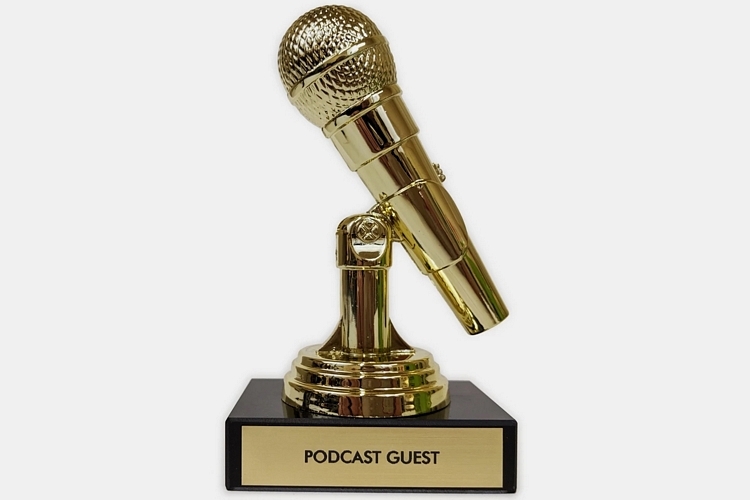 Yes, podcasts are no longer an obscure internet thing, with some of the biggest ones gaining even bigger audiences than talk shows on TV. Well, that’s the case for the big ones anyway. Your podcast, on the other hand, gets little to no listeners. And your guests feel like they just wasted two hours acting like children trying to mimic people on TV. What to do to make them feel just a little better? Maybe give them a Podcast Guest Trophy.

A trophy to commemorate their participation in your crappy podcast, it gives them a token to remember that time they wasted an afternoon talking endlessly on the mic with one of their buddies that people can listen to anytime they like. Sure, they won’t get national recognition, cult popularity, or even the respect of their co-workers by appearing in your show, but they, at least, get to home with a shiny, new trophy that they can show off on a shelf.

The Topatoco Podcast Guest Trophy is an erstwhile standard-looking trophy, just like those normally given at sporting events, talent shows, and various awards ceremonies.  In this case, though, the trophy is topped with a microphone figure, since talking on the mic is probably the one thing all podcasts have in common. It measures 5.5 inches tall, from the bottom of the base to the top of the microphone, so it should make a nice display piece, whether in a trophy case or in a random display shelf at home. The phrase “PODCAST GUEST” is engraved on the base, ensuring people don’t mistake it as a trophy for the local karaoke tournament.

The Topatoco Podcast Guest Trophy is available now, priced at $15.