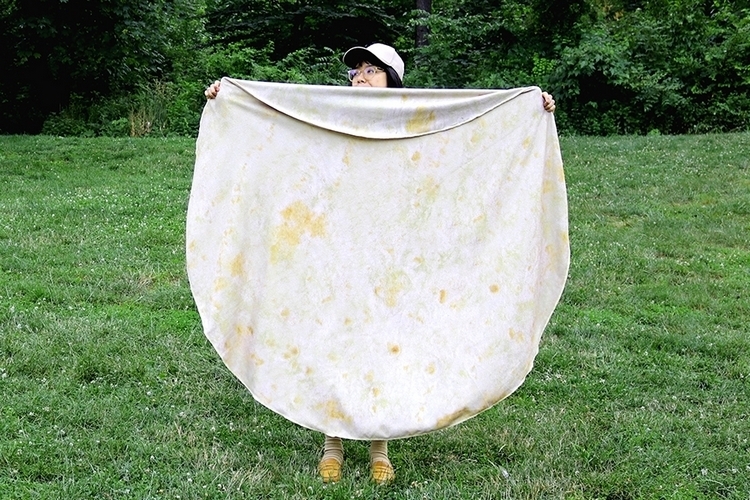 Sunbathing on a beach while lying down on a Pizza Towel is always fun. You have to admit, though, the novelty of looking like a pizza topping only keeps things interesting for so long. At some point, you need to change things up. Like, you know, hanging out on the beach looking like a tasty Mexican dish using this awesome Tortilla Towel.

A large and round beach towel, it comes with a photorealistic print that makes it look like a giant piece of soft tortilla. Well, that, or an old, dirty towel with big patches of yellow stain. Yeah, we guess you’ll have to do some explaining why you’re rolling around on the rattiest piece of blanket some of the time, which isn’t so bad since that means the darn thing comes with instant conversational fodder.

The Tortilla Towel looks, basically, like a giant flour tortilla, so you can use it to wrap yourself like a burrito, a taquito, a quesadilla, or even an enchilada. Granted, you’ll have to pour a whole lot of sauces on the towel to make a realistic giant enchilada, but if you’re trying to amuse yourself, it should be absolutely worth the hassle. It comes with the photorealistic print on both sides, so it will always look like a tortilla no matter which side is on top. Do note, it’s not an actual tortilla, so it won’t turn into nachos if you bake it, although that should be a good way of burning down the kitchen.

Available now, the Tortilla Towel is priced at $35.