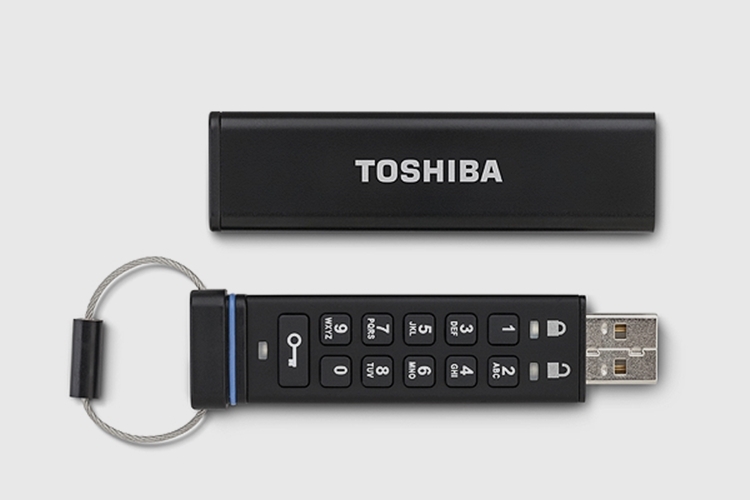 While guarding sensitive data on thumb drives with software-based protection (such as that drive that required voice authentication) is a great step towards securing it, anyone paranoid enough about what they’re carrying will always appreciate just a little bit more. That’s exactly what the Toshiba Encrypted USB Flash Drive brings to your data, giving the thumb drive a physical number pad that requires a correct PIN before allowing access to its contents.

Armed with military-grade AES5 256-bit hardware-based encryption, it becomes considerably more difficult for the wrong people to get access to any of your information. As long as you use a sufficiently non-obvious PIN code, the extra level of protection should ensure even the most sophisticated software-based workarounds won’t stand a chance to get remotely close to stealing your data.

Upon plugging to a computer, the Toshiba Encrypted USB Flash Drive requires the PIN to be manually entered on the onboard pad before even allowing the host machine to properly recognize it, with the drive automatically locking back up immediately after it’s removed from the port. It offers no alternative way of entering the code either, so the requirement cannot be circumvented by any clever software trick. There’s also a Brute Force Hack Defense Mechanism that will automatically wipe out all of the drive’s contents as soon as 10 consecutive unsuccessful attempts to unlock the drive have been made.

Other details include an aluminum housing (dust- and water-resistant), USB 2.0 interface, and multiple PINs (one for an admin who can allow PINs for individual users). Do note, available capacity maxes out at 32GB, so if you’re transporting huge CAD files of doomsday device designs, you might need a few of these to properly carry them all.

The Toshiba Encrypted USB Flash Drive is available now, with prices starting at $60 for the 4GB and topping out at $180 for the 32GB. Yeah, security comes at a steep price.