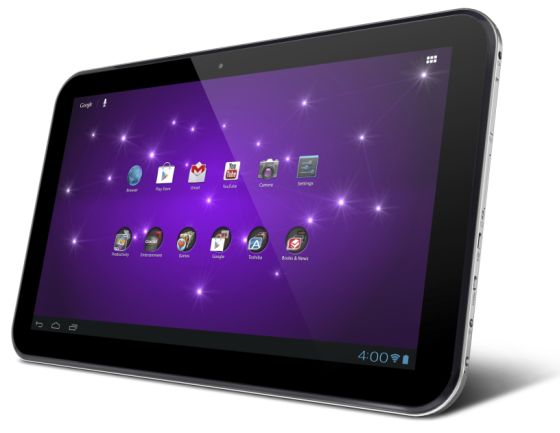 We all know that tablets have been steadily eating away at computer sales the past couple years. But will they eventually replace regular desktops and laptops as the de facto computing machine for the home? Toshiba seems to be thinking so and are rolling out a tablet designed to do just that: the Toshiba Excite 13.

Since it’s still just an Android slate, we doubt it can replace your primary work and gaming machines. If your primary use for a home PC is watching downloaded movies, surfing the web, doing video chat and similar tasks that don’t exactly require heavy computing power, it actually makes perfect sense. At the least, it should prove a slightly more mobile alternative to all-in-one desktop computers.

While there’s no built-in kickstand, the Toshiba Excite 13 does ship with a stand, so you can use the device for watching movies hands-free right out of the box. It also comes with better integrated speakers than other tablets currently in the market, ensuring it’s loud enough that you can use it even without hooking up a separate box for piping sound through. And despite the large display panel, the entire thing is thin and light, measuring 0.4 inches in thickness and weighing just 2.2 pounds.

Details of the tablet include a 13.3-inch screen (1600 x 900 resolution), a 5.0 megapixel camera in the rear, a 1.3 megapixel video cam out front, WiFi, Bluetooth, two storage sizes (32GB or 64GB), and SD card expansion. While there is no full-size USB port, there is a microUSB slot supporting USB host mode, HDMI, special TV outputs, a 3.5-mm headset jack, and a proprietary docking port. Nvidia Tegra 3 will run the action, with Android 4.0 Ice Cream Sandwich as the OS of choice.

The Toshiba Excite 3 will debut in June, with pricing expected at around $750.