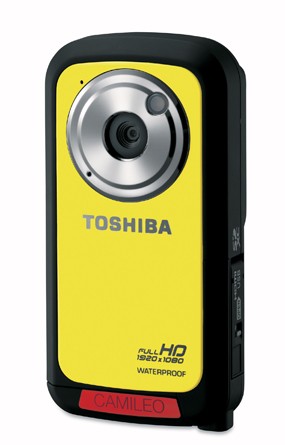 The Flip was awesome but is dead and gone.  We doubt it will really be missed, though, with a plethora of pocket camcorders waiting in the wings to take its place.   The Toshiba Camileo BW10 happens to be one of them.

Designed for rugged outdoor use, the 3.5-ounce pocket shooter can stand up to water, dirt, snow and other harsh elements. It won’t just film your dogs chasing strangers in the beach, too — the rubberized coating allows it to capture action up to 6.5 feet underwater.

The Toshiba Camileo BW10 can take full 1080p videos with electronic image stabilization, along with 5 megapixel stills.  A 2-inch LCD in the rear lets you watch the action while it’s captured, with the content saved via SD cards.  There’s also a USB slot onboard, along with an HDMI port for watching videos on a TV (there’s no bundled HDMI cable, though).  As with most shooters in the category, this one comes bundled with software for easy Youtube uploading.

While it doesn’t sound like the best underwater-capable pocket camcorder today (we’ve seen models that can shoot at greater depths), the Toshiba Camileo BW10 does come in at a very attractive $149.99 price point.  You can score it in either a silver or yellow finish.