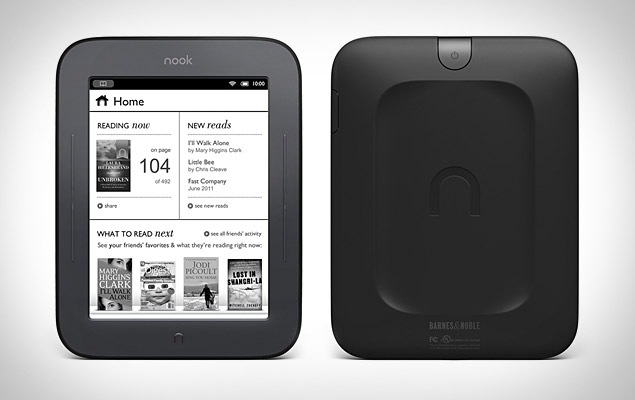 We guess touchscreen prices went down this year, so cheap e-readers will be getting them by the droves.  After Kobo’s announcement of their WiFi Touch e-reader, it’s Barnes & Noble’s turn to go the same route with their second-generation Nook.

Foregoing the hybrid LCD/e-ink design of the original Nook, the new reader actually looks like a smaller iPad at first glance, with it’s 4:3 dimensions and spacious bezel.   A lone button sits at the bottom of the display, with the rest of the controls accessible directly from the resistive touchscreen.

The new Barnes & Noble Nook features a 6-inch Pearl e-ink display, paired with a similar infrared-based touch technology as Kobo uses in their e-reader.  Other details include an 800 MHz TI OMAP processor, WiFi connectivity, 2GB of onboard storage and microSD card expansion.

A modified version of Android 2.1 runs the show, which potentially allows this to run apps (in grayscale, of course) down the line.  An on-screen keyboard is available for highlighting passages, looking up words and even typing notes.   The screen, by the way, employs a proprietary technology that minimizes the flashing and ghosting e-reader fans are only too familiar with, creating a more natural effect when you turn the pages.

Barnes & Noble also announced a new feature called Nook Friends, a social  service that lets you follow Nook users to see their reading and recommendation lists, as well as lend books to each other.   The second-generation Nook is available for pre-order now, priced at $139 .  Shipments start going out on June 10.