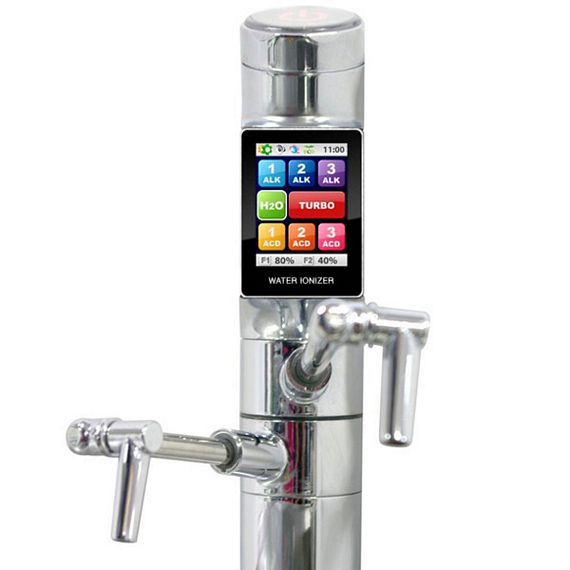 When you’re rich, your faucets don’t just come with built-in water purifiers — they have touchscreens too.  At least, that’s what happens when you install the Tyent UCE-9000 Turbo Water Ionizer, which is probably as high-tech a kitchen faucet as you will ever find today.

If you’re paying premium for a faucet, you want the water to be perfectly potable and this thing should serve you 100% on that end, putting your water through a double filter system — one using carbon and another using three kinds of ceramics.  They top that off with an electrolytic antibacterial system to ensure nothing that can harm you manages to slip through.

The big selling point, of course, is the “turbo” function that lets the Tyent UCE-9000 Turbo Water Ionizer produce either strongly alkaline or highly acidic water all on its own, giving you full control at the touch of a button.  Using the onboard touchscreen controls, you can set pH levels anywhere from as low as 2.0 (for disinfecting and sterilizing) to as high as 12.0 (for heavy-duty kitchen cleaning) and everything in between.  It’s the first appliance of its kind to feature a CPU-managed power supply, ensuring optimal operation and safe use every step of the way.

Designed to install on kitchen countertops, it requires a bit of cabinet space below, so you probably won’t be able to set it up on your Kitchen Hydroponics Island.  Features include dual spouts (both adjustable), capacitive power button on top, voice-guided announcements and an automatic self-cleaning function.

Basically, the Tyent UCE-9000 Turbo Water Ionizer can clean your water, turn it alkaline or make it acidic, all while letting you control it from a touchscreen panel and talking you through every step of the way.  Not bad.  Price is $2,795.