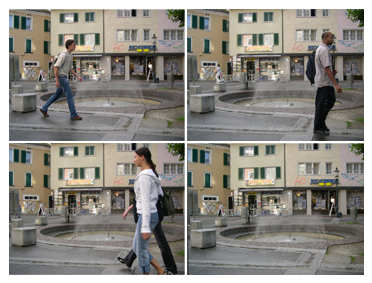 Want to enjoy your travel photos without all the tourists and passers-by right in the middle of the shot?  Try Snapmania’s Tourist Remover service, which blasts those pesky obstacles out of the frame.

Graphic designers have been wielding the same magic with Photoshop for a while now, though it typically takes more than a single button-press to generate the results.  Tourist Remover brings the same capability to the masses, without requiring a single iota of graphic knowledge.

Of course, it doesn’t simply clear the path in some miraculous manner.  Instead, you’ll need to upload multiple shots you’ve taken of the same scene from the same angle.  Once you do, the software will flex its muscles, averaging out which items to delete and which ones to keep intact, basically keeping all the pixels that stay the same.  The results are photos without the unwanted foreground elements, almost as if you had the scenes all to yourself.

Price is free for the first 100MB of photos, with options for paid upgrades in case you need additional space.  The downside is it isn’t really magic, which means you’ll need a sufficient number of shots (Tourist Remover requires a minimum of three) for the software to be able to reconstruct the full background.  Similarly, objects that are present across all shots (like a banner, for instance) won’t be removed.  Lighting also needs to be consistent for you to derive the best results.

At any rate, Tourist Remover puts a very useful function in otherwise regular people’s hands that was previously only available to those with decent Photoshop skills.  That way, you don’t have to bitch at tourists walking by when you take your snaps.