Toyota Gets Into The Supercar Business With The Lexus LFA 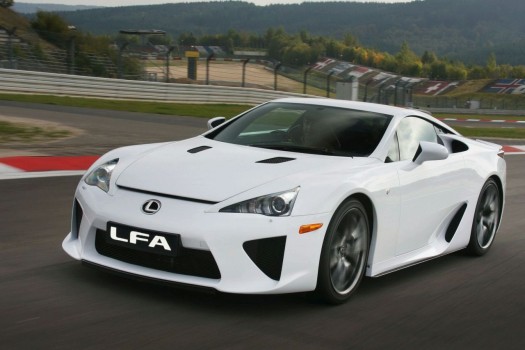 Toyota and supercar aren’t two words you expect to see together.  That should change somewhat when the company rolls out the Lexus LFA, which stole most of this year’s thunder at the Tokyo Motor Show.

Begun as a research project back in 2000, the big bucks sports car first came out as a concept back in 2005.  Now, it’s a full-blown prototype, with a production schedule locked in for next year.

The Lexus LFA is a two-seater exotic, molded in the tradition of high-end numbers from Ferrari and Lamborghini.  Managing to weigh a light 3,263 pounds, the vehicle foregoes aluminum in favor of carbon-fiber-reinforced plastic (CFRP) for most of the chassis and bodywork.  According to the company, CFRP accounts for 65% of the body, with aluminum alloy making up the rest, saving around 220 pounds in the process.

Powering the car will be a hand-built 4.8-liter V10 engine that blows out up to 560 hp.  Sporting aluminum alloy, magnesium alloy and titanium alloy construction, it boasts lighter weight than even conventional V8 engines.  It will post top speeds of 202 mph and a 0 to 60 acceleration of 3.7 seconds.  To complete the supercar experience, Lexus tuned the exhaust system to mimic the sound of a Formula One car at full revs.  Other features include double wishbone front suspension, a multilink system at the rear, carbon ceramic brakes, six-speed ASG transmission, an LCD-fitted instrument panel and three performance tiers.

Like other ultra-high-end supercars, the Lexus LFA will come with a superlative price tag, to the tune of $375,000.  Only 500 will be built when the car begins production from December 2010 to December 2012.