Toyota Tacoma ATG Is An All-Terrain Truck For Gamers 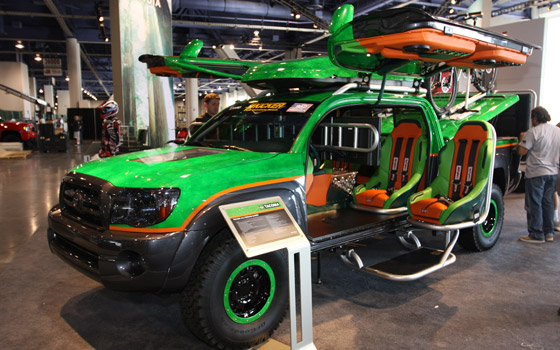 Gamers and “going off road” don’t exactly make sense when paired together.  But that’s exactly the union that Toyota and Microsoft dreamed up when they put together the Tacoma All Terrain Gamer (ATG), a lavishly pimped-out four-wheel drive designed for game enthusiasts on the road.

Displayed to crowds at the ongoing SEMA event, they took a stock Toyota Tacoma (double cab pickup with a six foot bed) and turned it into a veritable gaming console on wheels.  It features four Xbox 360 Elites, hooked up to four Samsung 24-inch LCDs (with swing-out mounts).  The front seats fold out to the rear, so it lines up with the seats in the back, allowing all four passengers to play right next to one another.  It uses a single giant gull-wing door on each side to allow fully-open entryways, with the raised door acting as a roof for the folded-out front seats. 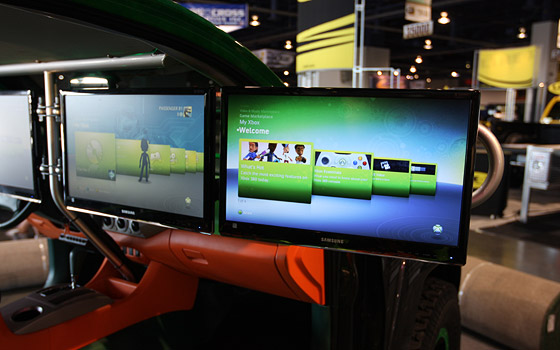 Kicker Audio Systems took care of the sound system, which includes a 12-inch Kicker Solobaric L7-12 subwoofer (1,500 watts) and eight Kicker QS65.2 6.5-inch mid-range speakers.  A 60-inch Samsung LCD is mounted right on the vehicle’s trailer hitch, so spectators can watch the ongoing action.  Under the hood, the Tacoma features a TRD-enhanced 4.0-liter V6, that puts out up to 304 hp and 334 lb-ft of torque.  The entire ride has been painted in the new Halo ODST color scheme. 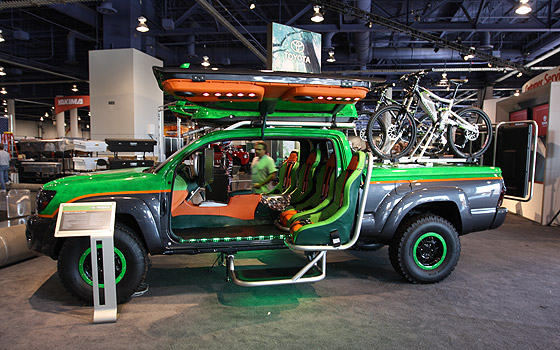