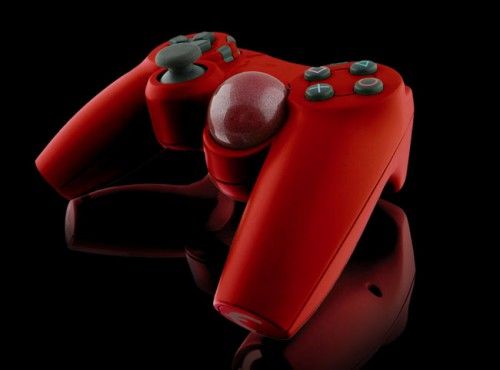 I love ridiculous mash-up controllers like the Shogun Bros Chameleon and the FragFX Shark.  And while we’re not sure if the Trackball PC Game Controller will ever make it to production, I damn well hope someone makes it someday.

It’s basically a standard game controller sporting the familiar PS2 controller layout with one difference — the right analog has been replaced with a trackball mouse.  That way, FPS gamers can get more precise aiming and movement without having to put up with a clunky mouse and keyboard combo.

Personally, I probably won’t find the Trackball PC Game Controller  that much better.  Despite many brushes with trackball controls over the years, I haven’t really grown accustomed to them. They just aren’t as exact or as accurate as a standard optical mouse has been for me. If you’ve been using a trackball mouse for gaming, though, you’ll probably find this an attractive option for Modern Warfare all-nighters on a PC.

The controller will connect to PCs via USB, registering itself as both a game controller and a trackball mouse.  From what we can tell, they’re still yet to finalize the engineering of the components, so this will likely take a while even if the project gets funded on Kickstarter.

The Trackball PC Game Controller is currently waiting for backers on Kickstarter, where it still looks a long way off from the sponsorship target.  You can learn more about the project from the link below.