Scientists Build Tractor Beam 100x More Powerful Than Others Before It 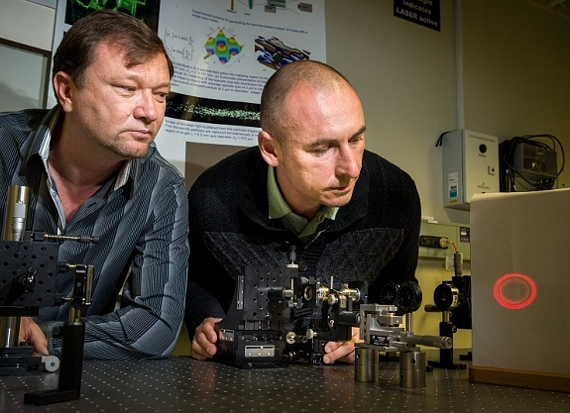 In the future, we can visit other planets and beam up their inhabitants into our spaceships.  Well, if we can make spaceships that travel that deep into space.  And if we actually find nearby planets that have existing lifeforms.  And if this new reversible tractor beam scientists developed can actually mature into a nefarious tech straight out of a sci-fi movie.  Watch out aliens, the Earthling invaders are coming.

In a report published in the journal Nature Phonics, scientists from the Australian National University Research School of Physics and Engineering detail their newly-developed tractor beam that can both repel and attract objects.  Granted, it’s far from a powerful tractor beam that can push and pull objects with the strength of a rhinoceros, but it’s a definite big step in the right direction towards getting there.

Described as a “long-distance optical tractor beam,” the tractor beam uses a single hollow laser that’s bright around the edges and dark in the center.  During the experiments, it was able to move particles measuring a fifth of a millimeter in diameter for a distance of 20 centimeters.  While not earth-shattering, that’s 100 times further than previous tractor beam experiments have achieved.

Instead of using photon momentum to impart motion like previous tractor beams, this new one traps a particle inside the dark center area, then uses the laser’s energy to heat it up.  Energy from the laser then travels across the particle’s surface, creating hotspots that, once sufficiently heated, will shoot away from the surface, causing the particle to recoil in the opposite direction.  Using careful management of the beam’s polarization, the scientists were able to push, stop, and pull back a particle at will.