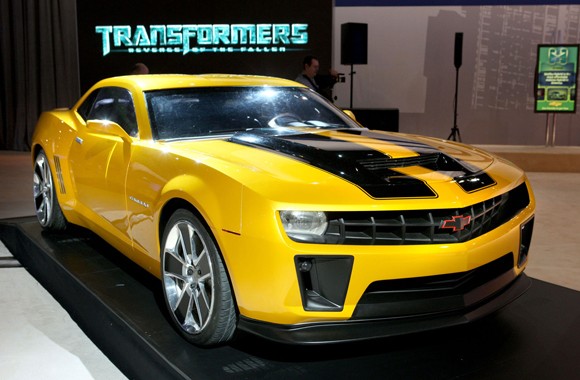 Well, not really.  But Chevrolet is launching a limited edition Bumblebee Camaro, the same car that’s part of the upcoming flick, Revenge of the Fallen.  It won’t hit the streets with “more than meets the eye” transforming power, but should offer enough niceties to make it a serious consideration for Transformer fans.

Oddly enough, the special edition Bumblebee Camaros won’t come with the same dark color (yep, Hollywood loves them  dark Transformers) the robot takes in the movie.  Opting for a more traditional presentation, it will sport the same Rally Yellow with black racing stripes that’s on all other Camaros, set apart only by special Transformers badging.

There aren’t too many details about the “rebadged” Camaros yet (since it seems like a late decision to capitalize on the movie), although the special logos will reportedly go on the wheel centers and sill plates, along with embroidered emblems inside the cabin.  Overall, it sounds more like an added incentive to buy what’s already a sweet ride (with a heavier price tag, no doubt).

Expect the Transformers edition Bumblebee Camaros to be available for order beginning June 1, with a choice of either a V6 or V8 powertrain.   Production is expected to commence on June 24th, the same day Revenge of the Fallen hits theaters across the US.