Transparent Canoe Lets You Watch Underwater Scenes While You Paddle 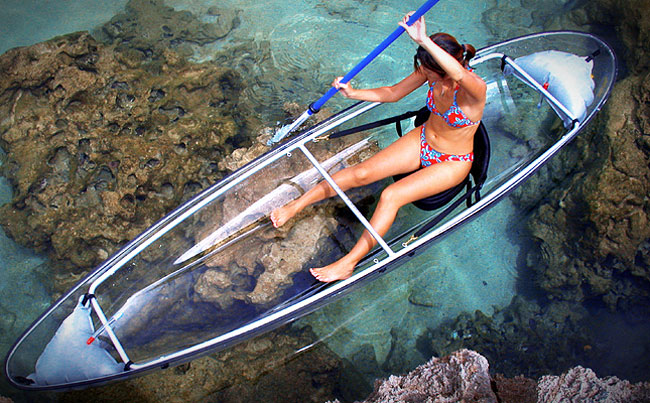 If Wonder Woman had an invisible boat to go with her invisible plane and they had to draw it in a comic book, it will probably look like the Transparent Canoe, a bona fide water vessel wrapped in a see-thru hull.

Why would anyone want a clear-bodied skiff?  According to its manufacturer, Colorado-based See Through Canoe, so you can “see the world below you with remarkable clarity.”  From the looks of it, someone with poor eyesight watching from afar will probably think you’re floating on water. Which is kinda cool.   Of course, that means the piranhas right under can see their next meal too.  Mmmm…chicken legs…pass.

The Transparent Canoe is made from a clear polycarbonate shell that offers 100% visibility from both outside and inside.  Durable and hard-wearing, it’s the same material used to build the bulletproof cockpit canopies of jet fighters.  The hull is fastened to a lightweight aluminum frame, allowing it to weigh a floaty 40lbs.

Features include a retractable skeg system for easier paddling, two removable seats, a water bailer, two dual-headed paddles and two polyurethane flotation bags for emergency use.  And by emergency, we don’t mean needing to expel yesterday’s buffet dinner.  It measures 133 x 33.5 x 11 inches, with space for up to two people carrying a maximum combined weight of 425 lbs.

While it’s probably not the kind of small boat hardcore enthusiasts will go for, more whimsical adventurers, including female superheroes, should find plenty to like in the Transparent Canoe.  You can take one home for $1,475.