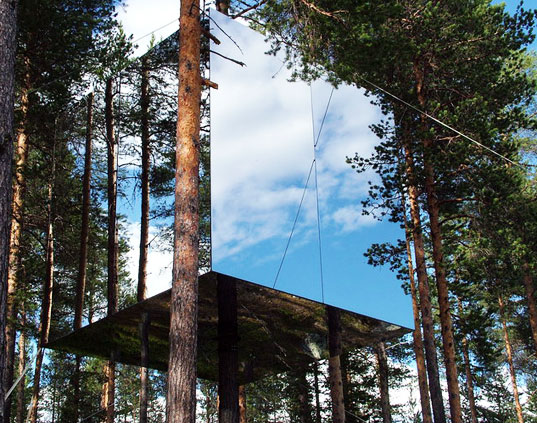 Tree houses aren’t anything new.  In fact, even Tarzan had one.  An entire hotel service made up entirely of themed tree houses in the middle of the forest, however, is certainly something different.  That’s what makes the Treehotel so remarkable.

Located in the pristine forests of northern Sweden, the lodging facility consists of separate tree houses, with each one dressed up as a private room.  Owners Britta and Kend Lindvall decided to start the unique lodging destination after watching the  2008 documentary, The Tree Lover, which explored the connection between trees and people in the country.  They bought the forest land, called in favors from architect friends and, eventually, opened the facility, determined to prove that the natural environment around them had value beyond supplying logging companies with timber. 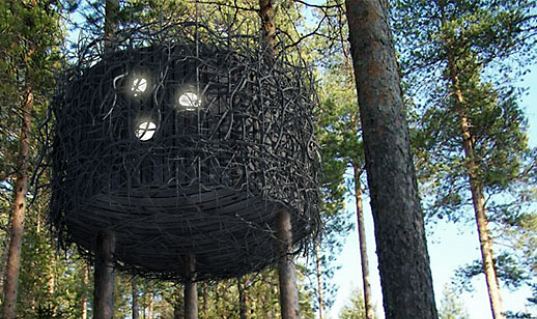 Treehotel currently has four cabins available for rental, all of them suspended in trees at least 20 feet above the ground.  Finished rooms consist of the Mirrorcube, a two-person cabin with the exterior walls encased in a completely reflective surface; the Bird’s Nest, a circular room that can house four guests, done up to look like a giant mass of twigs; the Blue Cone, a four-person abode that looks like a Lego structure; and the Cabin, a two-person space pod with a huge viewing deck and a floor-to-ceiling window. 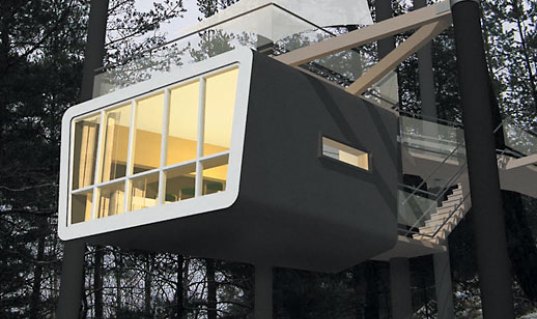 Two more rooms are slated for completion within the year, the UFO and the Room with a View.  A total of 24 rooms are being planned, each one built by a different architect and getting the same up-high treatment for enjoying the gorgeous views in the surrounding forest.  Each room sticks to the basic living amenities (to go with the nature-inspired theme), which include large beds, underfloor heating, incineration toilets and water-efficient hand basins.  Common saunas are also available.

The Treehotel is open for rentals all year-round, complete with planned activities for the guests that center on exploring the surrounding environment.  You can now book your stay directly from their website, with prices starting at around £300 per treehouse per night.