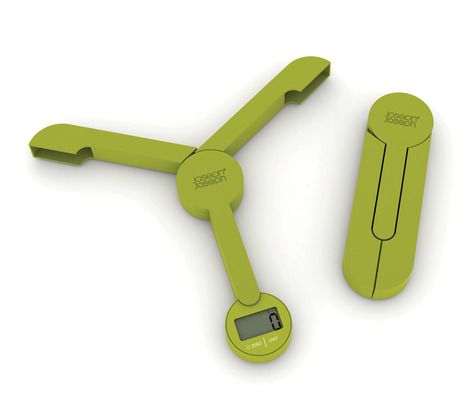 Saving countertop space in the kitchen is a new priority for you.  Partly, because you can’t help yourself from buying new kitchen appliances every month; mostly, though, it’s because you installed two bartop arcade cabinets there last month.  Yeah, not the best idea ever.  The Triscale just might be the new kitchen weighing scale for your space-challenged countertop.

Made by Joseph Joseph, the measuring equipment can fold into a compact size that looks no bigger than a TV remote, allowing you to easily hide it in the corner of a kitchen drawer when not in use.  Just because it’s small doesn’t mean it’s severely limited, either — when folded out, it can hold large bowls and even entire pots for really precise measurements.

During use, the Triscale employs three arms (one fixed, two fold-out) to support the frame of large containers, allowing you to weigh the contents of plates, bowls and trays on the minuscule digital scale.  At the end of the fixed arm sits an LCD screen, which shows the readouts, with touch-sensitive controls sitting under it.  The folding arms are designed such that their ends double as a shield for the screen, protecting it from all the sharp and heavy items it shares drawer space with.  Features include all the usual digital scale functions, with special ones like “add and weigh,” which allows you to reset the weight after dumping each ingredient in a bowl, so you get to measure items individually while directlt mixing everything together.

The Joseph Joseph Triscale will be available in the Fall, priced at $30.