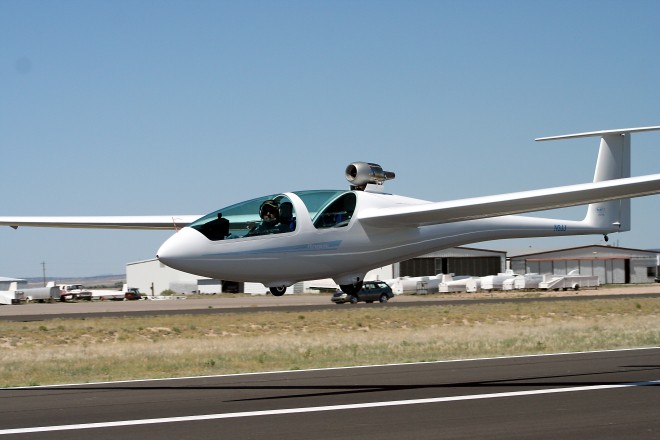 Self-launching glider aircrafts aren’t new.  However, most of them either use a small piston engine or an electric motor.  Desert Aerospace, on the other hand, dispenses with those pedestrian solutions, outfitting their high-performance glider, the  TST-14J BonusJet, with a retractable jet engine.

Granted, this isn’t the first time somebody used a jet on a glider.  So far, though, it’s all been hobby builds, with the small New Mexico company being the first to indicate their intent to distribute one commercially. 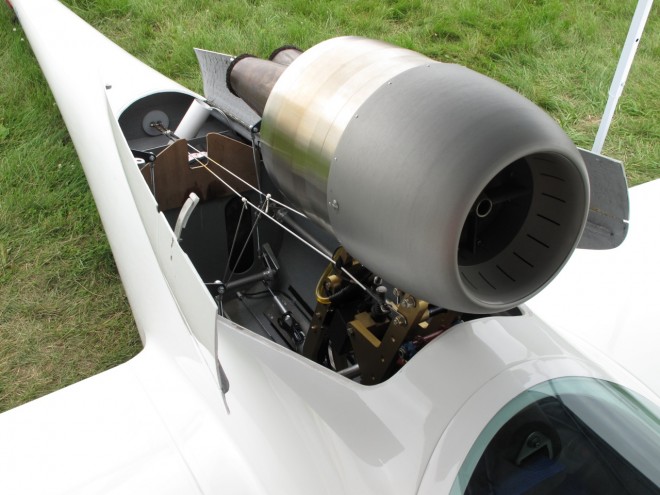 The  TST-14J BonusJet prototype is a lightweight sailplane intended for cross country soaring and cruising flight.  Helping it launch by itself is a PBS TJ-100, a relatively simple jet engine that weighs a light 45lbs and produces 240 lbs of thrust.  As the name suggests, the aircraft uses a modified TST-14J glider body, with a fuselage installed behind the two-seater cockpit where the engine has been placed.  Once the sailplane successfully lifts up at a high altitude, the pilot can have the jet fold down into the pod, with the retractable doors automatically closing to keep it out sight.

Phase One testing for the jet-powered sailplane has already been completed, with the team declaring all systems to be functioning correctly.  During its lone flight, the glider successfully launched itself, climbing at over 900 feet per minute.

German manufacturers have had a foothold on the market for high-performance, self-launching sailplanes, so competing with them is the foremost concern on Desert Aerospace’s mind.  While no numbers are available, they’re hoping to gain a competitive edge by pricing the TST-14J BonusJet much less than current self-launched gliders in the market.