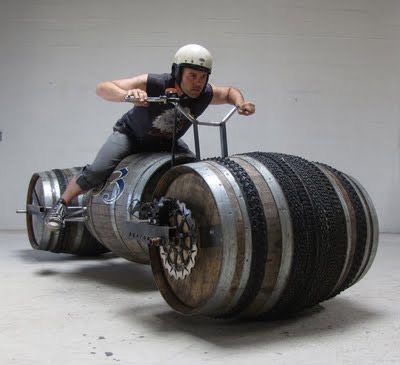 Soap box cars have never been overpowering vehicles.  The unusually-styled Twin Barrels Burning, however, takes the lack of speed to a whole new level, topping out at 3mph.

Regarded as the slowest soap box racer in the world, the car finished dead last at the Portland Adult Soap Box Derby back in August, yet won the event’s award for Best Engineering.  As slow as it may be, it was hard to deny the innovative (and ridiculous) spirit behind it.

Twin Barrels Burning uses three wine barrels as its main parts, two serving as wheels and the other one for the body.  They wrapped the two wheel barrels with bicycle tires and staples, adding plates to the front unit where the rotors and disc brakes were mounted.  A ‘57 Ford F100 drop axle served as the frame, with foot pegs and handle bars for steering. 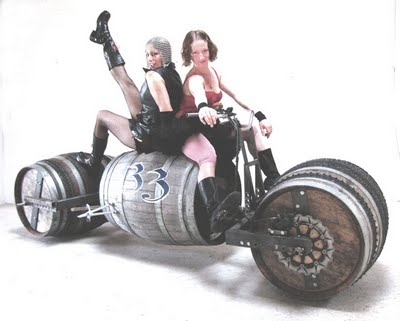 The result is a ridiculous-looking ride, whose level of insanity is matched only by the originality of being able to fashion a soap box car using wine containers.  Surprisingly, the vehicle didn’t even turn out as the crowd favorite; that honor was snatched up by a giant Lego car that joined the race.

You have to admit, the Twin Barrels Burning doesn’t look all that bad.  It’s not pretty by any stretch, but it’s more than I ever pictured a car made from wine barrels could ever look like.  Somehow, I get the feeling we’ll be seeing a couple of copycats in Soap Box Derby competitions around the US.  Hopefully, a few of those will go a little faster.