Two Straps That Turn Your iPod Nano 6 Into A Watch

The iPod Nano 6’s clock face app, combined with its clean, touchscreen-dominated front panel, just created a new category of accessories.  This will likely be a very crowded space soon, but if you want to get in early on sporting your minuscule music player in watch form, here are two straps ready to wrap around your wrists now.

Do note, neither of these offer a solution to the obvious problem of earphone cables hanging out of your wrist.  If you’re too cheap to buy a real watch and are getting an iPod Nano 6, though, these should do the trick. 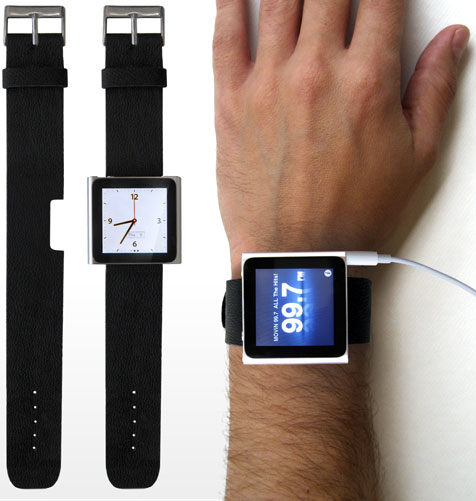 Granted, the name is terrible, because all it brings are images of sweaty geeks in front of a Wii.  Regardless, the Rock Strap is a classy-looking watch band that actually doesn’t look out of place in a business casual attire.  That is, if you don’t mind an oversized wristwatch with your wardrobe.

Made from genuine leather and designed to accommodate the Nano’s built-in clip, it does make the diminutive, touchscreen-fitted device feel like a real timepiece.  Price is just right too, at $19.95. 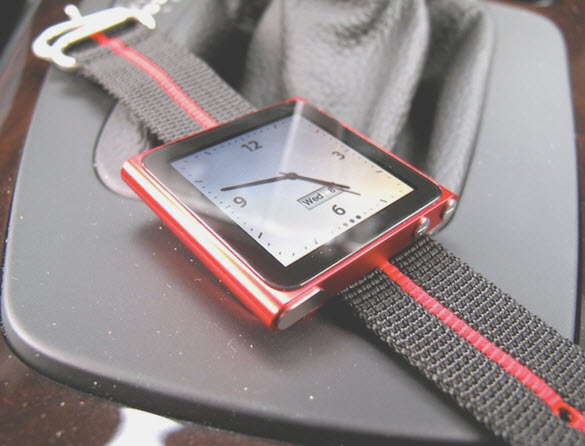 Another early entrant to the market, the iPod Watch Band goes right after the casual and sporty set.  In contrast to the Rock Band’s genuine leather, it lets you clip your iPod Nano 6 to a 22mm Maratac nylon band, which should prove easier to tuck away in your pocket when it’s raining outside (yep, the Nano’s not water-proof).

The bands come in a variety of designs and colors, allowing you to pick one that better matches both your iPod Nano’s color and your personal style.  It’s available now for $17.