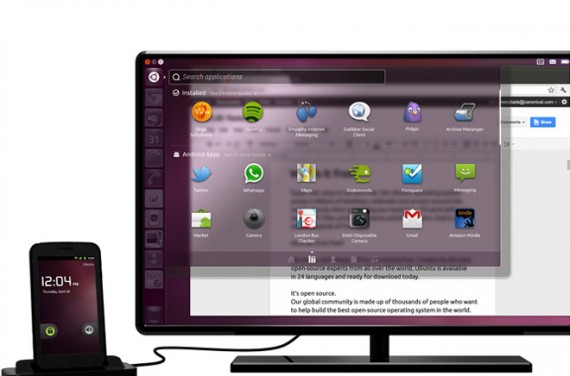 Remember those old products that crammed Windows XP into a giant smartphone form factor?  Yeah, that was ridiculous.  The Ubuntu for Android however actually sounds like a reasonable way to bring desktop powers to your mobile devices.

Don’t worry, it won’t attempt to put a desktop platform on your smartphone’s undersized display, much less have you connect a mouse and keyboard to it.  Instead, it’s going to work similar to Motorola’s Webtop interface, showing up only when you connect the phone to a desktop display.  Since it’s a full-fledged desktop OS, though, you get all the benefits of running Ubuntu — including its existing library of available software.

Ubuntu for Android, basically, turns your phone into a two-in-one: it runs like a regular Android smartphone during mobile use and works like an Ubuntu desktop when plugged into a dock.  Canonical hasn’t revealed details about their partners for the hardware part, although the early  descriptions peg it to be a dock that feeds the display onto a standard monitor and hooks up to the usual peripherals.  We’re guessing a device similar to the Lapdock won’t be out of the question, either.

The two OSes won’t run oblivious of each other — they are, in fact, expected to share contacts, media and apps, among other data.  The software will only work for multi-core phones, though, which should have both the processing power and memory necessary to run the Linux distribution full blast.

Will the day come when your smartphone also doubles as your home computer?  In all likelihood, yes.  And this could be the start of it all.  Ubuntu for Android, along with compatible hardware docks, isn’t expected to roll out until the end of the year, though.