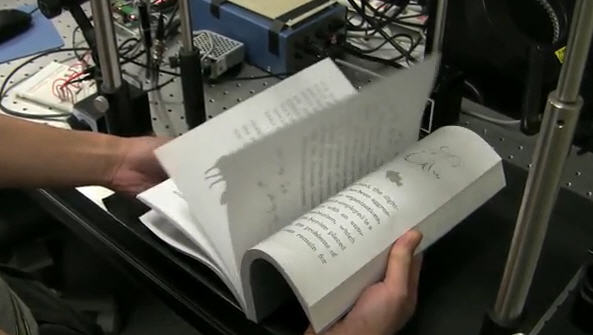 Getting a book digitized (and, presumably, into the torrent realm) is about to get easier. Much, much easier. That is, if this ultra-fast book scanner, currently under development by Masatoshi Ishikawa’s team at the University of Tokyo, ever makes it to the masses.

Ishikawa has gained some amount of fame in robotic circles for his Super Vision Chip, which can see and register events that are too fast for the human eye. This book scanner is one of that chip’s newer applications.

Created by lab members Takashi Nakashima and Yoshihiro Watanabe, the superfast scanner lets you capture book pages by simply flipping through them. An overhead camera , which can capture 1280 x 1024 resolution images at a rate of 500fps, watches keenly as you move from page to page, capturing every page spread within split seconds. For each frame, the system first shines regular light on the page, capturing text and images. After that, a laser projects lines onto the page, which it also captures.

Because you’re flipping through a book, rather than opening it cleanly, the captured images are curved not flat. The software fixes that by obtaining a spread’s 3D model via active stereo methods and then reconstructing it into a flat version. Yes, software that can fix a document photographed from a bad angle. Pretty wicked, right?

While currently a lab prototype, this really is quite exciting. At its current configuration, the team said that it can digitize a 200-page book in one minute, given a few mistakes here and there, and are looking for even more ways to speed it up.

You can see the prototype scanner in action on the video below.