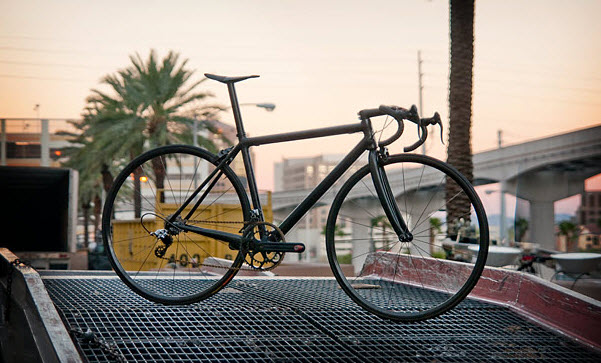 How light can you make a full-fledged racing bicycle?  Extremely light, as it turns out, as this little bundle weighs just six measly pounds.  That’s lower than half of the 15-lbs that Tour de France competition bikes actually weigh.

Built by Tucson’s Fairwheel Bikes, the two-wheeled machine is supposed to be fit enough for riding and has, in fact, clocked in a total of 20,000 miles.  Naturally, nearly every part of the vehicle is custom made, with the singular goal of making it as heft-challenged as possible.

The entire bike has been fashioned almost entirely from carbon fiber in order to achieve the weight.  Highlights of the specs include a 10-speed rear gear, a 2-gear chainset,  AX Lightness brakes that weigh just 145 grams (both front and rear), a machined aluminum crankset at 281 grams, AeroLite Lite pedals that have been custom drilled for even less mass, one-piece saddle integrated with the post and a pair of wheels that weigh just 585 grams (for both).

Currently belonging to an anonymous owner, the bike was shown off at this year’s Interbike Show.  It’s not for sale, but they estimate interested parties willing to part with $45,000 can probably get one by recreating every part of the custom build.