This Tiny Implantable Chip Is Powered By Ultrasound Waves 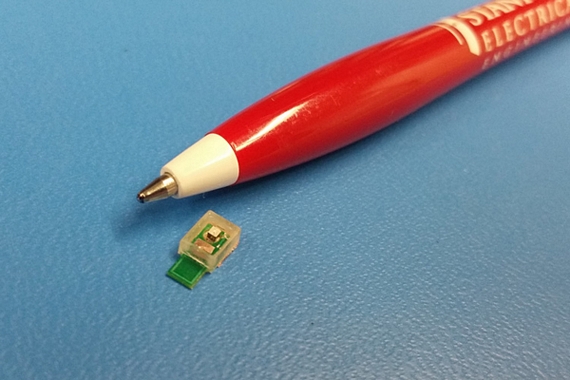 In the future, we can all have chips inserted in our bodies that do not need to be hooked up to a power source in order to function.  Instead, you simply beam ultrasound into wherever it’s implanted to keep it up and running.  That’s the promise made by these new tiny chips being developed by engineers at Stanford University.

Rather than use conventional sources of power, the chips include a piezoelectric material that reacts to ultrasound by compressing and decompressing over a million times per second, producing enough electrical charge to enable the chip to perform its tasks.  That’s right, no wires or batteries that can complicate its use – just beam some ultrasound its way and the thing will run.

The current version of the chip does three things: generate energy using ultrasound waves, execute medical commands, and report the status of the activity using an integrated radio antenna.  A wide array of medical applications, especially those that involve bio-sensing and stimulation therapy, are expected to take advantage of the innovation.  We’re not entirely sure what specific tasks future versions of this implant will be rigged to do, but it will probably range from monitoring your vitals to delivering medications to morphing you from the inside into an alien lifeform.  Shocking twist.

A working prototype of the implant was recently presented at the IEEE Custom Integrated Circuits Conference in San Jose, California.  The team behind it is led by Amin Arbabian, an assistant professor of electrical engineering at Stanford University.