Umazone Desktop Speakers Disguises Itself As A Tube Amp, Blinks Like A Music Robot 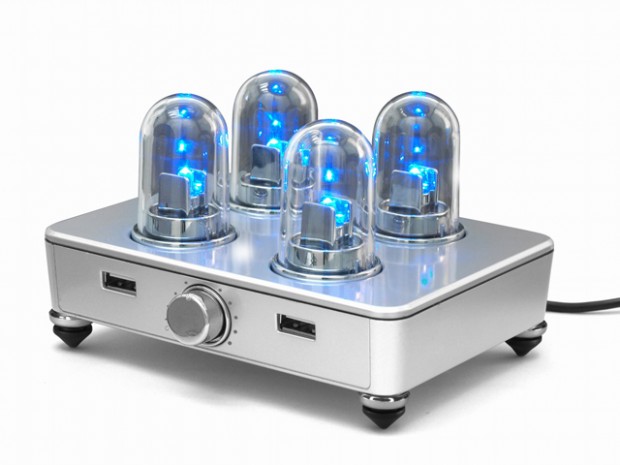 I always thought tube amplifiers were awesome.  Not that I particularly cared about the differences in sound they create, but those light valves sticking out make them look like props straight out of a campy 1950s sci-fi movie.

Umazone’s Showa Wind looks like one of those pricey vacuum amps.  Except it isn’t.  There’s none of the sunset orange glow or that low, familiar hum.  Instead, it’s just a PC speaker with a bunch of blue LEDs for effect – just the kind of gear to piss off my visiting audiophile friends.

The dual 38mm speaker set connects via USB (requires two ports) to any Windows PC, producing two-channel .35W sound at a 45db maximum.  Four “tubes” that are actually just blue LEDs under polycarbonate domes sit on top, blinking like ambulance sirens while it pumps out your heaviest tunes (Taylor Swift or Miley Cyrus or whatever you like).  It measures 5 x 4 x 3 inches and weighs 220 grams – just the right size to create an attractive distraction in your workarea.   Body comes in either gray or black.

On the hunt for a cheap set of speakers?  It’s tough to do better than one that lights up like a party robot.   It’s extra-cheap too at only $25.