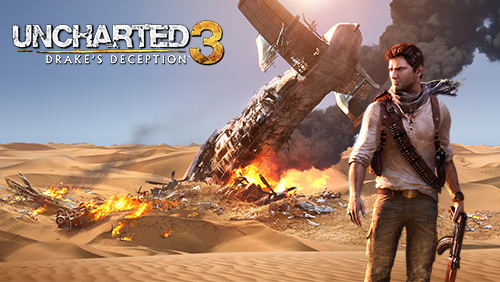 Imagine your first kiss. The excitement, the nervousness and then feeling sick from all the adrenaline afterwards.

Imagine never owning the original Playstation and then getting PS2 bundled with GT3 game just by chance while its sold out everywhere because you stopped for supper in Malvern, Pennsylvania and a small electronics boutique had one in stock. Those graphics, game physics, all those awesome cars and racing with your friends for hours and hours in the split screen mode on a 24 inch TV.

Imagine never having read a single X-Men comic and walking into the theatre to watch the X-Men movie and coming out with your Jaw touching the ground. WTF was that!!! One of the best movies I saw actually. Again a total surprise.

Now imagine walking into Gamestop and picking up a copy of Uncharted: Drake’s Fortune just cause that “I am the coolest geek ever cause I know all about video games and I work here” pimply faced teenager store manage told you its a good game. Why are Gamestop employees so unfriendly BTW?

But boy was Uncharted: Drake’s Fortune a fun game. It was like actually being in a romantic movie where your girl’s family didn’t like you and they had goons after you with guns.Your friend just wanted to be a part of get rich quick scheme and finding some long lost gold was the way to go. Not exactly like that but you get the gist. Awesome gameplay and amazing graphics.

And then came Uncharted 2: Among Thieves. Imagine goons were still after you with bigger and better weapons but the weather was much colder just like in Minnesota today and the Metrodome roof had collapsed on you while you are in Nepal. So you had to cancel your date just like the Vikings / Giants game got postponed to Monday and would be played in Detroit.

And on top of that you have to save life of your paparazzi girlfriend along with her slow cameraman who likes to shoot with camera but also get shot with real bullets. But in the end it was awesome fun and one of the best games on PS3 ever.

And now the reason you are here. Naughty Dog has announced that the third chapter in Uncharted series Uncharted 3: Drake’s Deception is coming on November 1, 2011. Looks like fun. Seems like Nathan is stuck in a desert this time. I hope he packed shorts. Here is the trailer.

We can’t wait to get our hands on Uncharted 3. And compared to waiting for GT5 for more than 8 years, this almost one year wait doesn’t sound bad at all.
[phpzon]uncharted drake, 3[/phpzon]