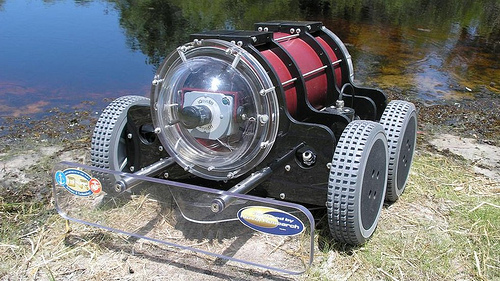 Still waiting for that promised future when robots will take care of cleaning our homes and properties?  Me too.  In the meantime, at least one of them machines will be doing a similar job for the US Navy.  Called the Hull Bio-Inspired Underwater Grooming  (Hull BUG) robot, the amphibious creation scrapes off barnacles, oysters and other marine life that end up sticking to the hulls of ships.

More than turning out a better-looking vessel (as the “grooming ” in the name suggests), the BUG will actually perform a much more crucial service to the fleet.  All those sea creatures holding on to a boat’s main body end up slowing it down, forcing the ship to use up more energy to maneuver itself in the water, eventually costing the Navy over $500 million in extra fuel and maintenance.  With the robot turning out a clean ship, the seafaring branch of the military should end up saving a ton of money, apart from having their ships run much more smoothly.

Operating autonomously on four wheels, the robot features an installed biofilm detector that it uses to discover parts of the hull needing to be cleared.  When it recognizes an area to be groomed, it performs the deed like a vacuum cleaner, sucking out barnacles and other sea life that find their way onto a ship while it sits in port.

Unless you live in a house boat , the Hull BUG probably won’t be of much use to you.  Still, any robot that takes care of cleaning is a robot I like.  It’s just another step closer to that inevitable future when we can just sit back and grab a beer while everything around remains wonderfully pristine.

The US Navy intends to equip the robot on ships that measure over 45 feet beginning in 2015.

[US Navy via Robots]