Control Your TV And Garage Door Using Your Blackberry With Unify4Life 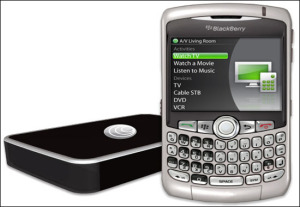 The Blackberry has become the device of choice for so many people today.  It is truly an all in one device that you can use to send and receive email, surf the net, listen to music and so many other things, but there is one thing that your Blackberry will not do – it will not take over the control of your television or any other of your remote control devices in the home.  Actually, Unify4Life has made all of that possible now with their brand new gadgets.  You will have to pick up two devices if you want to control your television and garage door via your Blackberry, but with these innovative items, your Blackberry will become even more useful to you.

The AV Shadow is the device that you will use to control your television with via your Blackberry.  You will be able to control your DVD player and the channels that you are watching with your new, powerhouse cell phone.  The device is powered by Bluetooth so there is no infra-red pointing required.  It’s pretty low cost as well, so everyone in your house can have their own personal control of the television and media devices.  That might present a few problems of it’s own though, don’t you think?

Unify4Life also has a garage door opening device that you can use with your Blackberry.  Let’s hope this innovative company keeps bringing on the devices and makes the Blackberry the center of the universe.  It’s almost there already, just a few more functions and you will be unable to live without it.