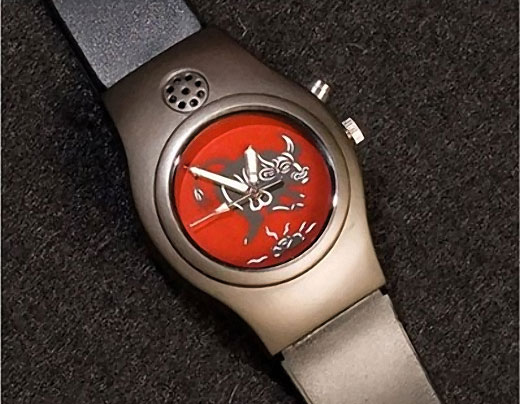 If you’ve been watching the latest season of Survivor, you’ve probably seen that “Dragon Slayer” guy who makes up tall tales of being lost in the Amazon and tortured by barbaric tribesmen.  I’ve met a few people like him in my time – irritating fools who spend their time bragging about imaginary stories.  It’s too bad they can’t carry gizmos in that island, because his competitors could really have used the Universal Bullshit Detector Watch.

Unlike the name implies, it doesn’t really detect bullshit on its own.  Instead, it relies on your own judgment, only providing the necessary comic relief to call the fib when it pours out of someone’s mouth.  The next time someone makes unfounded claims that you’d rather not listen to, simply press a button on the upper panel of the watch, at which point it will call the bullshit faster than your disdainful target can think up an appropriate follow-up.

Instead of expressing the feeling with words, the Bullshit Detector Watch will convey your sentiment in kind – it will flash, emit a pooping sound, moo like a cow and then fart, all in one fell swoop.  Creator Joey Skaggs says it simply matches the tall tale with equal amounts of nonsense, making the “calling out” part funny, instead of forcing the target to go on the defensive.  When they ask about the sound, you’re supposed to tell them, “Sorry, it’s just my Universal Bullshit Detector acting up.”

Apart from the comedic feature, of course, it’s also a functional timepiece, albeit a pretty ugly one.  It uses a Miyota 2035 quartz movement, encased in an aluminum alloy and comes with a black PVC strap.  Seriously, though, you’ll probably get more laughs for wearing this than for the farting sounds it makes – it looks like a child’s watch that comes free with a cereal box.

The Universal Bullshit Detector Watch currently sells for $40.  If you absolutely need the comic relief and can live with the less-than-pleasing aesthetics, it can provide all the put-down ammunition you need to get you through the rest of your days.