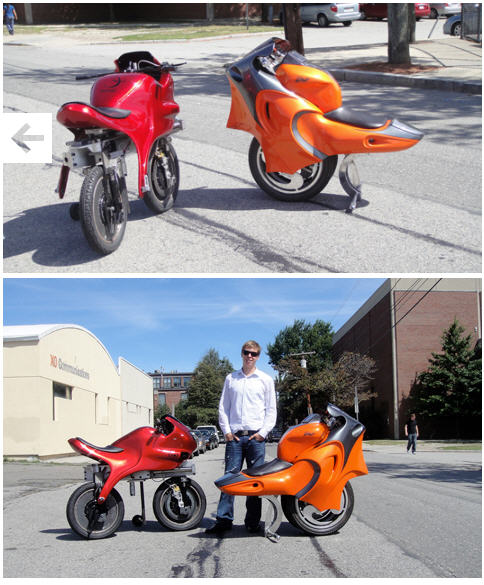 The Uno, a parallel-wheeled, self-balancing unicycle, was one of the hottest inventions of last year.  It’s so good, in fact, that its inventor – MIT sophomore Ben Gulak – already managed to round up $1 million in investments.

Now continuing development under the banner of the newly-founded BPG Motors, the Uno is undergoing a major change.  Apart from working as a two-wheeled unicycle, it can now automatically reorient itself as a bike with both front and rear wheels.

Why the sudden change?  According to Gulak, the original design called for the rider to accelerate by leaning forward.  While no untoward incidents were caused by this method, the potential for falling over (especially on busy, uneven roads) increased as the vehicle ran beyond 12mph.  Since the unicycle was designed to go up to 40mph, they needed to find a way to make it safer.

Thus, the bold decision to completely overhaul the chassis.  While the new Uno continues to run as a gyroscope-controlled, parallel-wheeled cycle, the side-by-side wheels now readjust into bike mode once it hits 20mph.  According to Gulak, the transformation will be smooth, being barely noticeable to the rider.  Apart from the new in-line configuration, they’re also redesigning various aspects of the vehicle, including a longer wheelbase and a lighter shell.

Disappointed?  I’m sure some will be.  After all, the Uno’s promise of a functional, no-hassle unicycle was way cool.  However, a bike that transforms in the middle of acceleration does sound equally awesome, doesn’t it?  BPG Motors is looking at selling pre-production models beginning next year.