Uranium Soap Cleans You Up With A Radioactive Glow 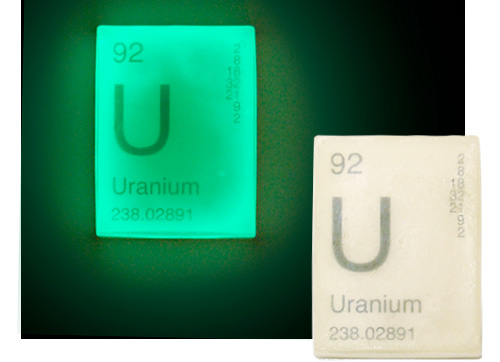 Ever wondered what will happen when you bathe in uranium?  I bet you’ll turn into a radioactive superhero.  Or just die painfully.  Either way, you can now find out for yourself with the Uranium Soap.

Before you call in Homeland Security, let me throw the disclaimer now: this is a joke product.  You know, like luxury cellphones that cost $10,000.  Except with this joke, it’s actually pretty funny.

The Uranium Soap is a 2.25 x 3 x 1 inch bar of soap with glow in the dark properties to create that radioactive substance shine.  It’s not really uranium, so don’t be stupid and order a truckload for that nuclear weapon you’re developing.  You need to get in touch with seedy government double agents for that.

It’s got the periodic chart entry for uranium slapped on the body, just in case someone asks for proof that you have radioactive soap (they’ll know it’s true since, you know, it’s printed there).  And what does human-tested and vegan-friendly uranium smell like?  Apparently, it’s scented like the ocean (hopefully, before all that oil leaked down there).

Hankering for a hot shower and uranium suds?  You can get the Uranium Glow In The Dark Soap for $6.99 a bar.