For all intents and purposes, the URB-E isn’t the kind of product that you look at and think it’s a must-have. I mean, it looks goofy. With an e-bike function that lets you ride it around and a folding design that lets you drag it anywhere, though, it just might be the personal transport device you’ve wanted all along. I mean, it looks better than a hoverboard.

Described as a folding electric scooter, you can ride it while comfortably sitting down at speeds of up to 15 mph. It’s got decent range, too, letting you cover up to 20 miles with a full charge, making it a viable alternative for daily commutes to and from the office (unless you work in another city, in which case, take the car). And since it folds, you can bring it inside the office, allowing you to charge it at work (takes just four hours from zero to full), so you can ride it all the way back to the house after clocking out. When folded, the URB-E is compact enough to either drag behind you (like luggage) or carry by hand, with its 35-pound frame allowing you to do so without requiring superhuman strength. You can also throw it in the trunk of the car when folded, apart from fitting comfortably in a corner of a train or bus during commutes.  Features include carbon fiber and aluminum construction, a 250-watt brushless motor, optional sport-tuned controller for increased torque and acceleration, and cross-drilled disc brake for guaranteed stopping power.  They also sell a selection of accessories, including cup holders, phone mounts, baskets, and more. 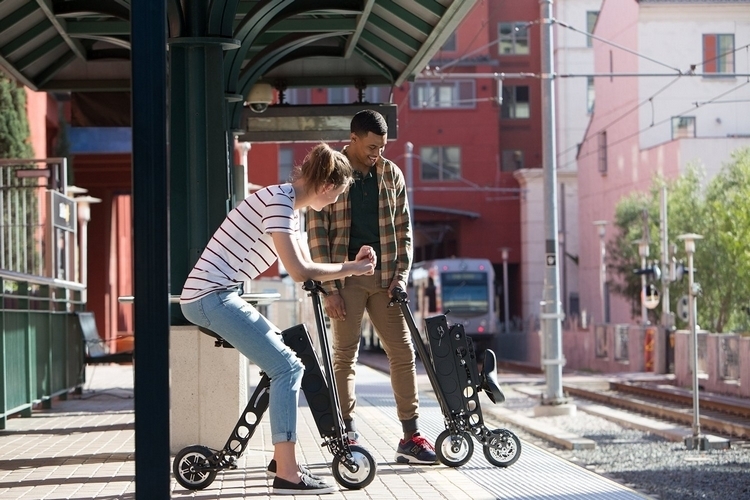