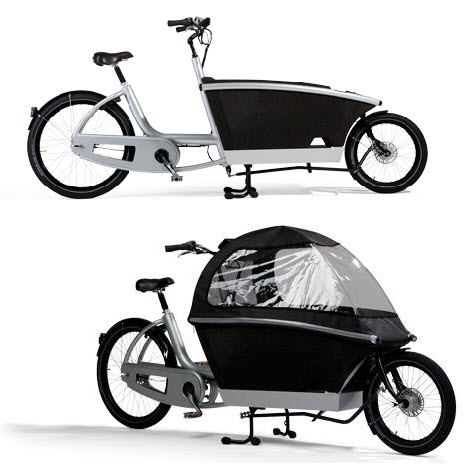 Cargo bikes are a double-sided sword.  On one hand, they let you use a bike to ferry loads you’ll otherwise need a car to carry.   On the other, pedaling with an extra hundred pounds in tow isn’t the best option for longer distances.  Urban Arrow’s electric cargo bike just might offer the best compromise.

Manufactured in the Netherlands, the vehicle pairs the cargo bicycle’s utility with the low-expense motorized assistance of an electric two-wheeler.  It’s the company’s first electric transport bike and, with the helpful load-carrying duties, it’s a ride that’s just begging to be noticed.

The Urban Arrow electric cargo bicycle uses a modular aluminum frame that allows it to take a variety of front ends.  Available front attachments consist of a short two-wheeler version for regular biking, a two-wheeled carrier (as pictured above) and a three-wheeled cargo version that can take a maximum 400-pounds of load.

While 400-pounds sounds like an overkill for a cargo bike, the fact that it’s motor-assisted (German-made)  and has a three-wheel option makes it a very plausible proposition.  Features include disc brakes, an EPP plastic box for the cargo bay (so your load doesn’t fall off) and an optional rain cover.  Apart from that, the company doesn’t offer much more details.

Urban Arrow is billing their electric cargo bike as the “first serious car challenger.”  By the sound of it, that might be true.  Of course, we’d prefer seeing a real one in action first.  No word on planned release dates, as of yet.