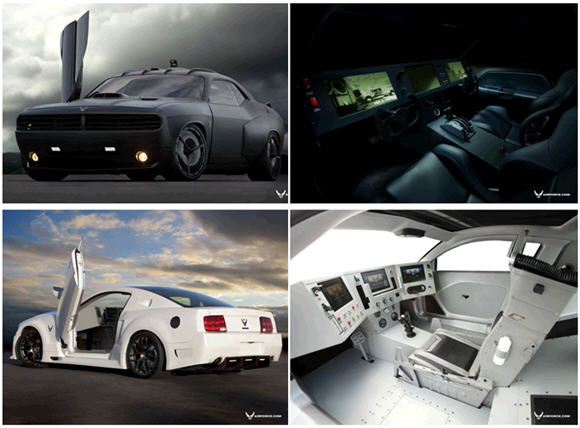 Sports car on the outside, jet fighter plane on the inside.  That’s exactly what the US Air Force has done with two new exhibition supercars, namely the X-1 (a modified Ford Mustang) and the Vapor Challenger (a modified Dodge Challenger). As part of the military arm’s latest Project: Supercar campaign, they commissioned Galpin Auto Sports to turn out the souped-up rides, which they expect to help draw crowds to the USAF’s recruitment events.

On the exterior, the cars look much like any tuner ride, sporting scissor doors, carbon-fiber trims, biometric sensors and a host of other modifications.  Inside the cabin, however, is where both vehicles set themselves apart.

Instead of a regular vehicle interior, Galpin outfitted both vehicles with cockpits that resemble the control area of Air Force fighter planes.  The stealth-black Vapor gets a similarly sly dimly-lit traditional cabin, with a dual-seat configuration, two steering wheels and a host of large display panels on the dashboard.  The matte pearl X-1, on the other hand, rocks a predominantly white true-to-form jet cockpit, featuring a center-mounted single pilot seat (complete with an eject option), flight stick (that, we assume, runs a concealed motorized steering wheel) and an undeniably jet-worthy dashboard panel.

Both cars will take the road in the Super Car 2009 Tour, which will visit high schools and USAF-sponsored events to aid in the Air Force’s recruitment campaign.

[Air Force via The Car Connection]