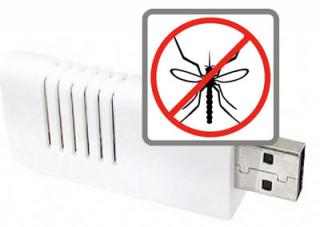 Mosquitos suck.  Literally and figuratively.  If you live in a tropical country (or a damp area) and like to take your laptop outdoors (to a café or some such), you’ve probably had an inevitable encounter with the stinging blood suckers.  As with many things in life, there’s a USB accessory for that now too.

The USB Mosquito Repellent Stick plugs into your PC’s open port and solves the problem all on its own.  No more anti-skeeto lotions to rub on your skin, toxic sprays or clapping really fast to kill it in your hands.  Just stick the ultrasonic peripheral in and work in peace.

According to the manufacturer, the anti-mosquito dongle transmits a sonic repelling frequency (a low hum  that’s inaudible to humans) that discourages the insects from coming near.  With an effective range of 1.5 meters, it capably secures your work area from the flying bugs the whole time that your computer is on.  Unfortunately, you’re back to fair game once you reboot or shut it down: prepare to be stung.

Apart from mosquitos, the sound is supposed to dissuade the majority of insects from coming near.  Unfortunately, that doesn’t include people you don’t want around (like your mother in law, for instance), so you’re stuck with her.

Unlike conventional repellants, the USB Mosquito Repellent Stick can be bought once and used many times over.  At only $5.69, it’s a solid investment when the need does come up.  For instance, when the zombie epidemic breaks out, insects may be the disease carrier that infects everyone.  Armed with one of these, you should be able to secure a small uninfected space for yourself (at least, until your battery runs out).