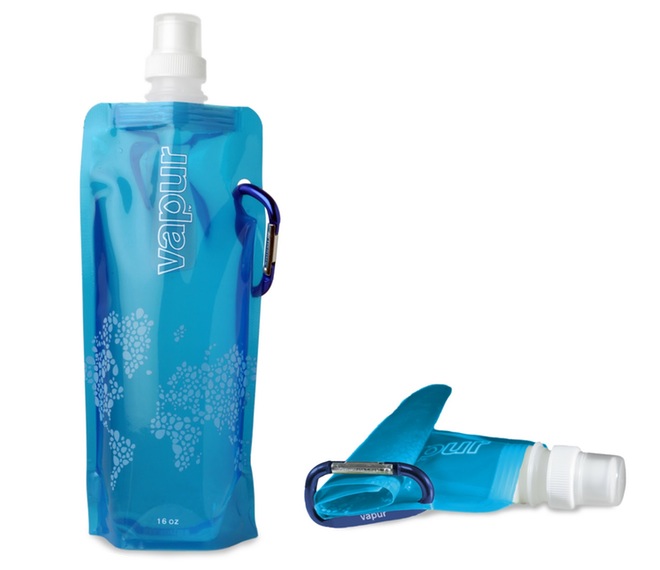 Reusable water bottles are great, mainly because they save you from having to contribute another plastic bottle to the earth’s landfill.  Except they also are inconvenient because you’re stuck having to carry a bottle around with you even after you’ve drank all its contents.  The Vapur Anti-Bottle solves that dilemma.

First, it’s really not a bottle, hence the “anti-bottle” label.  Instead, it’s more like one of those juice bags with a spout on top.  The idea is you’ll top it up with water for the road and when you’re done, you can just fold it into a small bundle for cramming into your pocket.  No more big container to carry around.

The Vapur Anti-Bottle is a foldable, reusable and durable drinking bag with a 0.5-liter (16 oz) capacity.  Made from an internal layer of polyethythene covered with two layers of nylon, the container can stand on a table when it isn’t empty, allowing you to lay it on your desk just like a regular water bottle.  It comes with a carabiner built into the body, which you can use to hang it from a bag and as a holding loop when you’ve folded the thing down.

According to the website, the bag can handle both frozen (you can use it as an ice pack) and boiling liquids.  They do caution against using hot water, though, since it won’t insulate your hands from the heat.  It’s also dishwasher-safe.

Oh yeah, this looks like an excellent way to sneak in alcohol, too.  Way less conspicuous than the Starfleet Drinking Flask you’ve been sipping from (just because you’re a grown man drinking from a Star Trek merchandise doesn’t mean people will just dismiss you as silly).  The Vapur Anti-Bottle is available now, priced at $9.99.