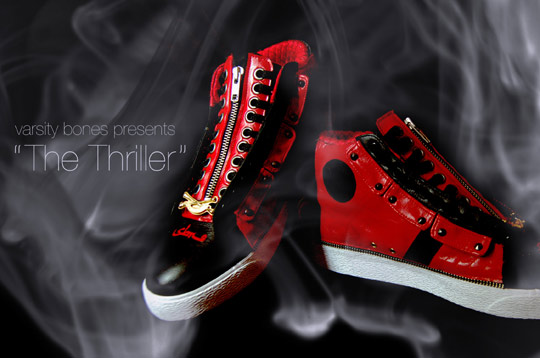 Michael Jackson’s Thriller has endured as one of the most memorable music videos of all time.  The red leather jacket he wore on that production is particularly iconic, having been used (and abused) in numerous Michael Jackson references (from comics to video games to movies) since then.  While it may be a little trite to wear the same outfit (I’ve seen several good imitations a few times now), adorning your kicks with a similar design might prove just a tad less dorky.

The Thriller Blazer from RoyaleFam’s Varsity Bones collection takes the jacket and slaps it into a pair of sneakers, turning out a spiffy-looking footwear that’s as unusual as the King of Pop himself.  Even better, you’re not likely to hear any tired 80s jokes while you have it on (unless, of course, you’re the one cracking them). 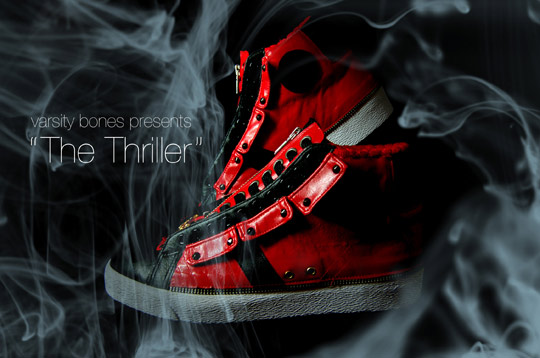 Ably mimicking the late singer’s get-up, the shoes rock out a lush red leather upper, punctuated by nine pairs of shoelace eyes and triple panel collars.  It shares space with black satin, studs and a zipper baseline, turning out the first pair of kicks I’ve ever seen that look like a real leather jacket.  Freaking strange, just like the man that inspired it.

With the Thriller Blazer, every night can be a Thriller Night even without a mass of zombies dancing behind you.  No word on whether it will magically endow you with moonwalking skills and a penchant for surgical anesthesia, but who knows?  RoyaleFam is releasing it to the unsuspecting masses come October 5th.