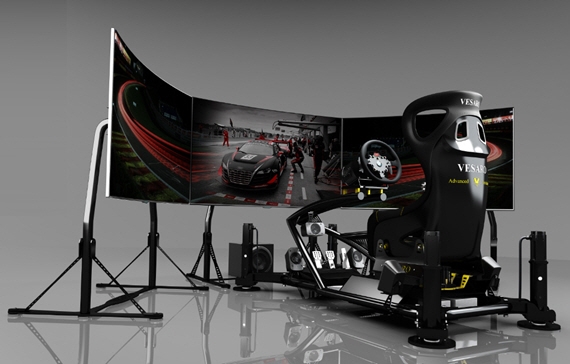 If you’re rich and enjoy racing games (or flight sims), a dedicated racing cockpit isn’t something you can pass up when outfitting the game room.  It’s, practically, a cardinal sin to have one missing.  And when it comes to a gaming cockpit’s ability to deliver realism, it’s going to be tough to find a better rig than the Vesaro 195.

Sporting a world-first 65-inch triple curved display, it gives players a massive 195 inches of screen real estate that curves around their seat, enabling a level of visual immersion unlike anything you’ve likely seen in the past.  Those 195 inches don’t just mean you’re literally drowning in visual sensations, either – instead, it represents a newfound ability to display cars you’re on the track with at a 1:1 scale, so they’re exactly as big on the game as they will be if you were behind the wheel of a speeding car in Nurburgring.

With the Vesaro 195, there’s no need to scale up the graphics or zoom in the field of view – everything is, literally, life-sized right in front of you, from the dashboard graphics to the track width to the guy who just came out of nowhere that you’re about to run down (oh, wait, this isn’t GTA).  Granted, response time is a tad slower than smaller monitors (like this huge but still way smaller LG Ultrawide), but, according to Vesaro, even pro racers who have tested the rig found any difference insignificant.

That monster of a display is accompanied by a range of custom-built Vesaro PCs, running on Intel’s latest CPUs, AMD Radeon 295 X2 Dual GPU graphics cards, and other high-end specs.  It also comes with a “military-grade” racing wheel and heavy-duty pedal system, both of which come with adjustable positions and force feedback controls, along with a combined sequential and H-pattern shifter.  Other features include a custom-built racing chassis, DBOX motion actuators for realistic racing movements (up to 6 inches of motion travel), four choices in bucket seats, and a 5.1 THX audio system.