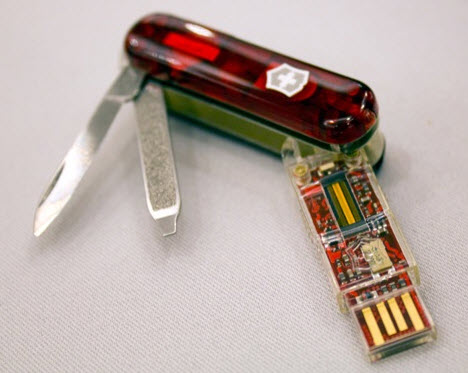 Victorinox knows the Swiss Army Knife is a dying pocket-filler, duly replaced by cellphones, iPods and a whole slew of mobile gadgets.  The Victorinox Secure SSD could very well be their attempt to remedy that, fitting in a high-capacity SSD into the pocket multi-tool’s iconic form factor.

The clever part is the SSD flips out of the case just like a mini-blade, a corkscrew or a nail filer from the Swiss Army Knives of old.   The cool thing is, they can still fit in some of those multi-tools, too (it will come as options), so you can have a couple of screwdrivers with the high-capacity drive sitting in your pocket.

Victorinox claims that their Secure SSD is the smallest of its kind — we’re not sure about that but it does look about the size of a regular pen drive.   You can hook it up to both a USB 2.0 port and an eSATA II port, with the latter allowing it to transfer data at native speeds, just like internal SSDs.

All drives are encrypted, so there’s ample security to go with your hefty storage space.  A tiny e-ink display is also included, which can show a variety of information, like the drive label and remaining space.

The Victorinox Secure SSD will come in three storage sizes: 128GB, 256GB and 512GB.  The first two will launch in March, with the larger capacity model slated for later in the year.  No word on pricing, but I do relish the upcoming utilitarian value of having a Swiss Army Knife in my pocket again.