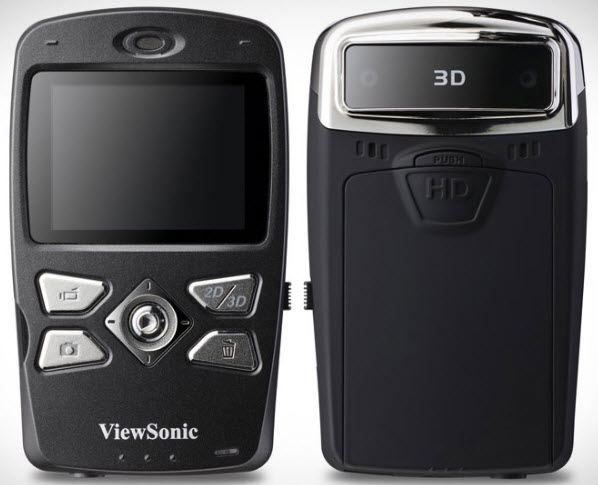 Pocket camcorders have gone a long way from the original Flips of yore (by yore, of course, we mean a couple weeks ago).  The ViewSonic Show’n Go 3DV5 goes a step even further, letting you shoot 720p clips in depth-displaying 3D.

If you’re going to buy a 3D HDTV (which, let’s face it, we’re all going to do eventually  — even me, who doesn’t like 3D), you might as well capture your life’s moments in video that will take full advantage of that stereoscopic technology.  According to the product page, video shot with this compact camcorder will play nice with majority of new 3D TV sets, as well as with the Nvidia Vision Kit for PCs.

The ViewSonic Show’n Go 3DV5 has a 5 megapixel image sensor, capable of capturing both 720p video at 30 fps and 2,592 x 1,944 resolution stills.  A button on the face lets you quickly switch between 2D and 3D shooting modes, while you watch the scene being recorded on the integrated 2.4-inch LCD.  Even better, you can playback clips right on the screen in 3D using the included red/cyan glasses.  Granted, wearing those eyepieces will make you look like an idiot while watching stuff on the street, but you know better than to pay attention to haters.  You’re cool — they just can’t see it with stupid 3D glasses on.

There’s a mini-HDMI port onboard, so you can plug directly to the TV to see your clips in a bigger display.   Other features include microSD card support (up to 32GB), USB connectivity, stereo mic (for recording audio with your videos), a half-watt speaker and a bunch of preset shooting modes.

Compact at 2.8 x 4.7 x 1.15 inches, the ViewSonic Show’n Go 3DV5 should be just as convenient to handle as any pocket camcorder in the market, all while managing to doll up your clips with some 3D magic.   Price is sweet, too, at $180.