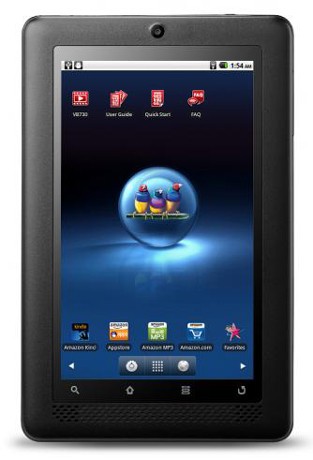 Had ViewSonic decided to add a cutout at the corner their new ViewBook 730 tablet, we would have thought it was the Nook Color.  And, yes, it’s just as sweet as B&N’s tablet/e-reader, packing decent hardware and an attractive price point.

Unlike the Nook’s semi-walled-off environment, the device runs a full version of Android 2.2 Froyo.  That means full support for regular Android apps, well beyond the platform’s well-stocked roster of ebook reading options, and Flash 10.1 right on the browser.

The ViewSonic ViewBook 730 packs a 7-inch touchscreen display, a 1GHz processor, a front-facing VGA camera, 8GB of internal storage, an HDMI out (yes, it can supposedly handle 1080p videos) and an SD card slot (up to 32GB).  While that sounds a lot better than what the Nook offers, the display does set it back somewhat, getting only an 800 x 480 resolution, which is equivalent to what most new 3.5-inch smartphones come out with.  Battery is rated at 8 hours of use on a full charge.

Amazon gets to wield its machinations around the device, as it comes preloaded with the Amazon App Store, Amazon’s MP3 downloads service and, of course, Kindle for Android.  It also incorporates something called RiteTouch technology, which makes the screen function well with a stylus for sketching and handwriting tasks.  While we doubt it’s anything as impressive as the HTC Flyer’s stylus, the drawing stick, in this case, comes with the tablet at no extra cost.

Availability for the ViewSonic ViewBook 730 is slated for the end of June, priced at a budget-friendly $249.99.