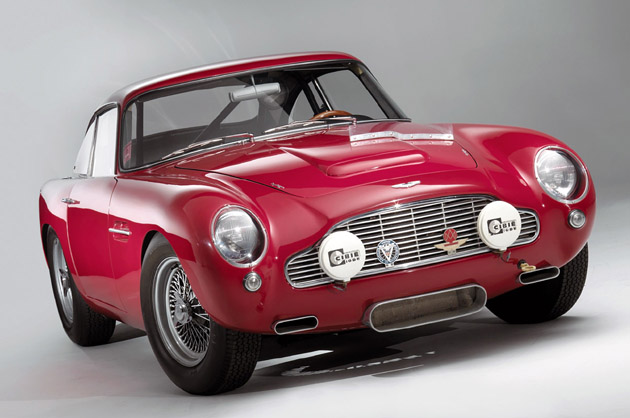 Want to own one of the rarest breed of cars ever put together?  You’ll get your chance this January, when RM Auctions puts a 1963 Aston Martin DB4 GT on sale to the highest bidder.  Yes, I’m talking to you as if I believe you can actually afford this.

Pegged as among the rarest of the rare, only 75 of these cars were built during its production runs between 1959 and 1963.  Of that number, only six belong to the lightweight models category.  Chassis #0175/L, the car going on auction, is the last of those six.

Like other lightweight DB4 GTs, this particular car cut down the weight by using aluminum components for the elegant fastback body in place of steel.  Additionally, it got rid of non-essentials (for racing) in the cabin, including the radio, speakers and heater.  It also received a total restoration during the mid-nineties, getting a variety of upgrades, such as Dayton wire wheels, a four-point roll bar and Dunlop racing tires.

The DB4 GT runs on a twin-cam 3.7 liter straight six engine, pushing an estimated 300bhp at 6,000 rpm.  Other details include a four-speed synchromesh gearbox, monocoque steel chassis, independent suspensions (four-wheel coil-spring in front and solid axle at the rear) and Girling disc brakes.

While built for the tracks, Chassis #0175/L wasn’t raced during the sixties, but did spend its latter years hitting vintage races at Lime Rock Park, Laguna Seca and other tracks.  RM Auctions is looking to sell it between $950,000 to $1,000,000, so if that’s within your ballpark, better get your cash ready for your post-Christmas splurge.