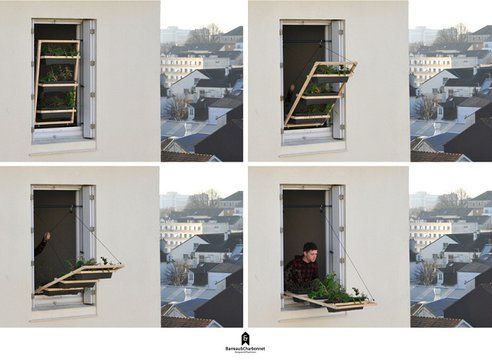 You live in a cramped studio high up in a building in a crappy part of the city.  It ain’t much, but it’s home.  Sometimes, though, you long for a home where you can set up a garden for growing your own mutant tomatoes and genetically-modified herbs.  Well, now you can with the Volet Vegetal.

Ever seen one of those vertical gardens that you can mount on outdoor walls?  This is kind of like that.  Since you don’t really have any outdoor walls to mount onto, it mounts on your window frame instead, putting a multi-row vertical garden right by your window.  Being that no one really installs anything like this, we doubt your building has a code forbidding it, too, so you’ll probably get away with it until that brown-noser of a neighbor decides to complain. 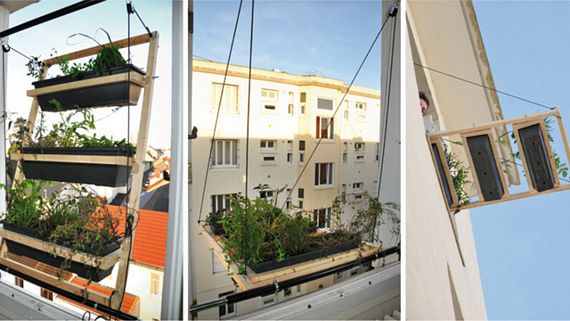 Made by French design firm Barreau & Charbonnet, the Voget Vegetal is a variation of the vertical garden designed for living spaces that have neither a patio nor a balcony.  As long as you have a window, it could work.  The outer wooden frame mounts onto a railing (if you don’t have a railing outside your window frame, you’ll need to install one), holding three rows of planters in an upright manner.  The top of the frame is attached to a pulley system that lets you raise and lower the entire thing drawbridge-style, with the planters automatically rotating to stay upright.  That way, you can  lay down the entire assembly flat when you want to watch the view outside or let the plants get a little sun.

The Voget Vegetal was made as a submission to the Jardins Jardin exterior design expo in Paris.