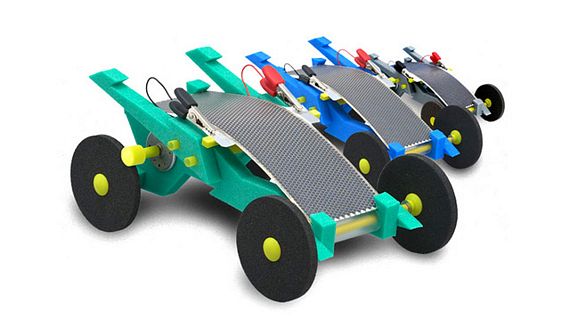 Buying a small child a toy with an integrated solar panel for power is like flushing money down the drain.  You just know they’re going to wreck that photovoltaic slab shortly down the line.  While these Solar Foam Racers’ flexible solar panel isn’t damage-proof, it will probably last a heck of a lot longer than the rigid ones other toy cars use.

Made by Toy Labs, the cars use a flexible polycrystalline silicon solar panel for its sun-gathering purposes — the first toy car to ever do so.  Aside from potentially being more durable, the flexibility also allows the panel to capture sunlight from a wider variety of angles, making for more efficient power generation to keep the car running as long as the sun is up.

The Volta Racers use lightweight and recyclable foam for the body and frame,  with the axles cut in bamboo.  It comes as a DIY kit that you should be able to assemble in around 15 minutes, with the frame and chassis configuration allowing for two different ways to install the panel.  The car is meant to run on its own (no remote control), so it only runs straight (drag-style) or in circles (f you angle the wheels accordingly).  It comes with two speed gearing options. The only real downside is there’s no battery, so it only runs as long it can soak up some sun, which is probably as good an excuse as any to get the kids to bed anyway.

Want one?  The Volta Racer is available now in five colors, priced at $24.99.