The Voltitude, A Fold-Out Bike That Looks Like A Swiss Army Knife 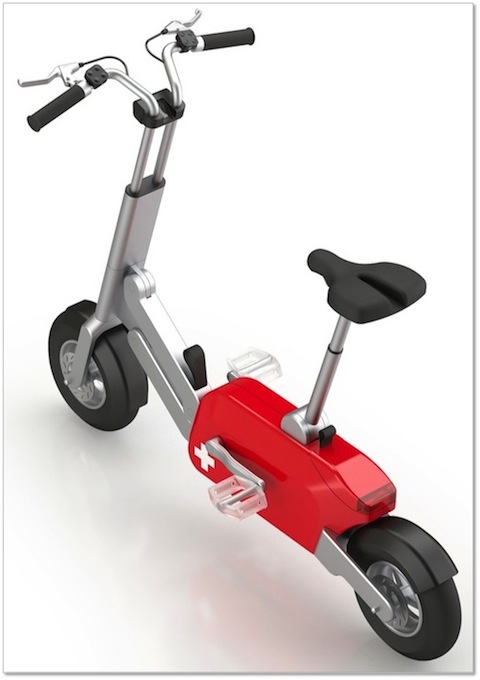 I stopped carrying a Swiss knife once I realized I had little use for its undersized tools.  Whether you still find it useful in your own life, you can’t deny the impact that its iconic design has had throughout the years.  While the Voltitude isn’t really a giant Swiss Knife, it is styled to look like one, adding a unique flair to its actual function as a folding electric bike.

While it would have been awesome if you can fold the entire bike into the shell like an actual Swiss Knife, the compacting mechanism isn’t too shabby either.  Not only can the frame fold and unfold using only one hand, it does so in just one second, too, using the creators’ proprietary EasyFold System. 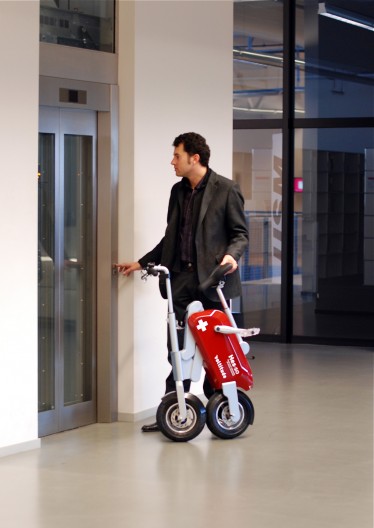 The Voltitude takes on a scooter form factor, while basing its operation on electric-assist pedal-pushed bicycles (like the eShadow and the eSpire without the corny “e” in the name).   Ground clearance is low, but the distance from the seat to the handlebars to the pedals feature standard bike dimensions, so it should be just as comfortable to ride as a regular bicycle.  A 250W electric motor sends power to the rear wheel, helping it run at an electronically-limited speed of 15.5 mph.  Onboard battery should be good for up to 25 miles (at very conservative speeds) on a single full charge.

When folded, the bike can be pushed around like a cart, so you need not strain your arms carrying its weight.  There’s also a button on the handlebar that will turn on the motor and send the wheels rolling at walking pace, so you need not even expend any energy pushing it along.  Other bike details include a sequential gearbox, hydraulic disc brakes, front and rear lighting, and an anti-theft lock.

Recently introduced at the Geneva Motor Show, the Voltitude is currently being manufactured in a small production run for Swiss customers.  A larger run is slated to ship at the end of the year, with pre-orders being accepted right now.