Watch Out Toy Cars, There’s A New Tank On The Block 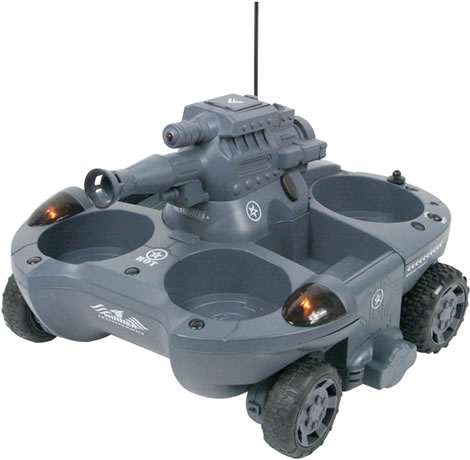 Remember the days when you had the coolest remote controlled toys on the block? Now those toys have given way to Ipods, laptops, NavSat Shoes, and tazers. But as psychologists suggest, an important part of growing up is never forgetting who you once were. Don’t forget the child you used to be, the child that had such cool toys you couldn’t decide which one to play with next! And now that you’ve embraced that inner child, what better toy could you celebrate with than the coolest remote control car to hit the market?

The Amphibious R/C Tank must be the brainchild of a military genius, because it’s ability to simulate a real tank in battle is extraordinary. The Tank starts in a sitting position, looking as harmless as a… well, as a child’s toy. But with one touch of your remote control, the Amphibious R/C Tank rotates its arms, setting the wheels on the ground, and takes off.

With full 4-wheel drive, the Tank is capable of traversing all kinds of terrain. It can even cross water. The Amphibious R/C Tank converts into a speeding boat in seconds. And should you come across any enemy vehicles or boats while your riding around, remember, it wouldn’t be a tank without an arsenal of weapons, and this Tank is no different. That mounted gun you see equipped on the front is really a BB gun perfectly disguised as a non-functional toy, able to fire up to a distance of 33 yards.

Did I mention the Tank also acts as a cup holder, holding sodas, beers, whatever, so while you and your friends are tired from a long day of play, you can offer to deliver drinks to everyone with a few touches on your remote control?

Embrace the child in you and get the coolest remote control car available: the Amphibious R/C Tank.