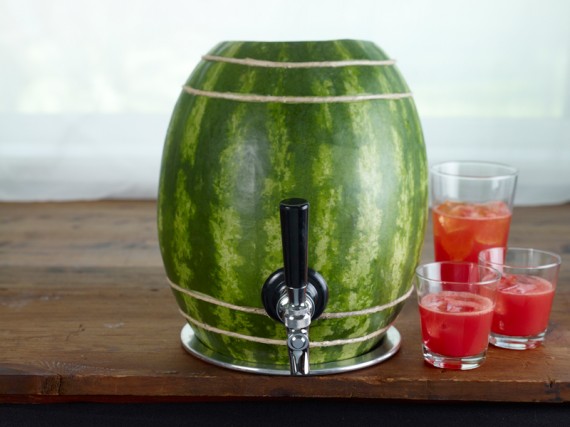 Serving punch in a bowl at a party was probably cool back when Madonna was in high school.  These days, it’s cliché.  If you want to wow your guests a little, serving your fruity alcohol mix in this Watermelon Keg will be ten times more effective.

Made by the National Watermelon Promotion Board (yes, there really is a thing), the mod turns a regular oblong-shaped watermelon into a fully-functional keg for holding and dispensing drinks.  Because of the shape and the skin, it actually looks like a green barrel keg, which simply adds to the novelty of the entire thing.

They aren’t exactly selling any pre-built Watermelon Kegs, but you can buy a watermelon off the grocery and turn them into a similar container as in the picture using the instructions provided on their website.  Essentially, the how-to guide covers cutting off both ends of the watermelon to get a flat base, scooping all the meat out while leaving two inches of meat so the bottom isn’t completely hollowed out, using an apple corer to cut a hole on the side and plugging in a spigot where you can draw your drinks.

You’re supposed to stand the final product on a flat plate to ensure stability and to minimize the likelihood of spills.  We’re not sure how well the fleshy base will hold, but we’re guessing it’s pretty good, since they obviously think people can DIY this.

Hit the link below to check the full list of materials and instructions for the Watermelon Keg.  With the spigot in there, we doubt this thing will fit in one of those Watermelon Coolers — if you could, though, that’s cold drinks all day.