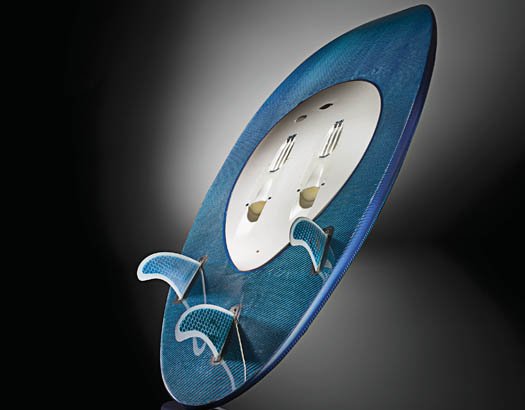 Surfing is one the most fun activities and a great workout. But sitting on the board for hours waiting for that wave and then paddling back to catch another is a rewarding feeling only surfers can understand. However, gliding over the water on a jet ski is also fun.  Taking one of them every time you head down the water is a lot of work, though — you can’t exactly throw a jet ski in the trunk of your car.   The WaveJet makes motorized water recreation a whole lot more accessible.

A personal water propulsion (PWP) engine, the rig can be installed in erstwhile non-motorized water sports equipment, such as surfboards, wakeboards and kiteboards.   That means, you can now ride your surfboard towards any direction without paddling, making for a new kind of in-water entertainment that you don’t need to tow every time you head down the beach.

The WaveJet is comprised of two battery-powered jets that are tucked into the underside of the boards.  When activated, it will deliver 20 lbs. of thrust, propelling riders at speeds of up to 12 mph on the open seas, all without having to do any physical work (other than keeping your balance, of course).  It uses oblong nozzles, in contrast to circular ones on jet skis, which helps conserve space while maximizing power.

Turning the jets on and off is accomplished via a bracelet remote, which also doubles as a kill switch when the rider is wiped out (similar to jet skis).  Power is provided by an onboard plug-in battery, with the entire assembly adding an estimated 15 lbs. to the weight of the board.

Currently, the WaveJet’s propulsion has been built into 11 surfboard bodies (most of which were designed by longboard-originator Steve Walden), with more, including kayak models, on the way.  Pricing for the jet-equipped boards is estimated to start at $4,500.

Check out the video below of WaveJet into action.