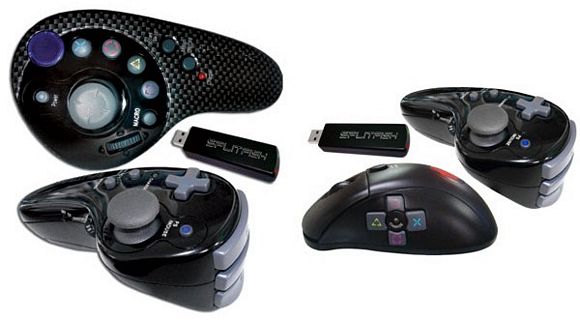 Still playing Infamous with a dogbone-shaped controller?  Don’t you think it’s time you broadened your console-gaming horizons with differently-configured control mechanisms?  This month, Splitfish is showing off two new devices that challenge the way you enjoy PS3 games, with the Dual SFX FragPro and the Dual SFX Evolution.

The Dual SFX FragPro has been touted by many as the best controller around for FPS enthusiasts, making first-person play as trouble-free as ever.   The FragPro package consists of a 2,000 dpi gaming mouse (based on the FRAGFx v2) and a nunchuck-type controller that facilitate flawless FPS throwdowns like nothing else before it.   Wireless and programmable, it claims a level of shot accuracy that a DualShock analog stick just can’t do.

The Dual SFX Evolution is the company’s latest creation, making its first-ever appearance at the Gamescom event this month.  Designed specifically for games like FIFA and Madden, the new system features a two-part (one on each hand) nunchuck-type controller configuration.  Wireless and upgradable, Splitfish claims it will offer a new level of intuitive experience for gamers who prefer sports and action titles.

Apart from the usual set of buttons, all of the pieces come fitted with onboard accelerometers, which you can configure as additional controls (mimicking the analog stick, for instance), giving you a movement-based option for influencing the game.  While it’s tough to say how good these things are until actually trying them out, I’ve had enough problems with standard dogbone-type controllers to know there must be a better way of playing.

Both the Dual SFX FragPro and the Dual SFX Evolution are now available for pre-order directly from the manufacturer’s site.